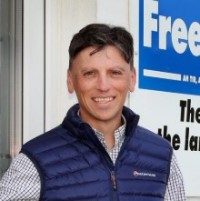 A weekly newspaper which ceased publication due to coronavirus has unveiled a new editor ahead of its return to print.

The West Highland Free Press has announced Keith MacKenzie will take the top job after 17 years with the paper.

Keith, pictured, takes over Ian McCormack, who retired from the Skye-based title at the end of January after 44 years in post.

The Free Press revealed in April it was temporarily ceasing publication in April due to the effects of the coronavirus crisis, but has now announced it is set to return in print on 7 August.

In the interim, Keith and reporter Adam Gordon – aided by the paper’s regular columnists – have continued to provide a free online edition.

Keith will lead an editorial team made up of reporters Michael Russell and Adam Gordon alongside award-winning photographer Willie Urquhart.

He said: “I am delighted to have been given the opportunity to become WHFP editor. It is a privilege to succeed a figure like Ian McCormack, who has made such a sterling contribution to journalism and to the communities served by the WHFP.

“I would like to thank him and colleagues past and present for their support and encouragement over the years. I am grateful to the WHFP team for investing their faith in me to take on the editor’s role.

“There is no doubt that this is a challenging time for newspapers, but an accurate and informed local media, committed to holding power to account, is still a very valuable thing.

“It has been heartening to receive so many good wishes of support from the community and beyond during our absence from the shops.”

Keith has collected several awards for news, feature and sports writing since he joined the Free Press as a journalist in 2003.

He is the current Highlands and Islands reporter and journalist of the year.

Free Press managing director Paul Wood said: “We are delighted to appoint Keith as editor of the West Highland Free Press. Keith is an award-winning journalist, highly regarded among his peers and colleagues.

“His in-depth knowledge of both his patch and what the Free Press means to Highland and Island life means the paper is in safe hands.”