The UK’s first employee-owned newspaper is among a number of new regional press titles to reveal they have temporarily ceased publication.

The West Highland Free Press has announced the measure in response to the coronavirus pandemic, along with other independently-owned papers across the country.

The same move has also been confirmed by the Leicestershire-based Times series, the Stranraer and Wigtownshire Free Press and Tindle-owned weekly The Forest of Dean & Wye Valley Review.

HTFP has approached the companies involved to ask whether any staff have been placed on furlough leave due to the changes. 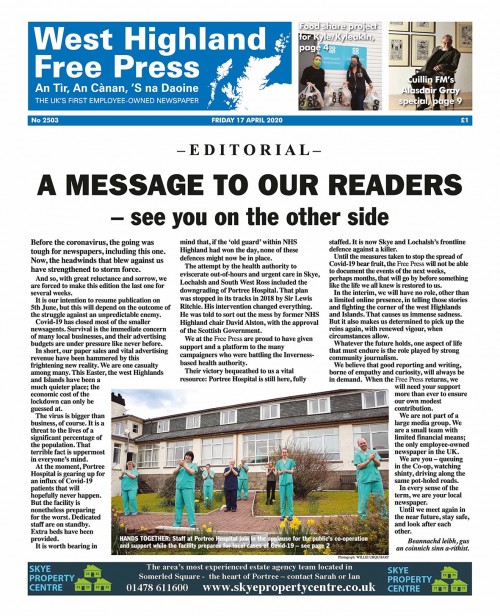 The WHFP announced the measure in the above front page editorial, published this morning, in which it said the decision had been taken with “great reluctance and sorrow”.

The paper, which is based on the Isle of Skye, stated it aims to resume publication on 5 June and would have a “limited online presence” in the interim period.

The editorial added: “That causes us immense sadness. But it also makes us determined to pick up the reins again, with renewed vigour, when circumstances allow.

“Whatever the future holds, one aspect of life that must endure is the role played by strong community journalism. We believe that good reporting and writing, borne out of empathy and curiosity, will always be in demand.

“When the Free Press returns, we will need your support more than ever to ensure our own modest contribution. We are not part of a large media group. We are a small team with limited financial means; the only employee-owned newspaper in the UK.

“We are you – queuing in the Co-op, watching shinty, driving along the same pot-holed roads. In every sense of the term, we are your local newspaper. Until we meet again in the near future, stay safe, and look after each other.”

The Stranraer and Wigtownshire Free Press announced its temporary suspension on Twitter, telling readers on Wednesday: “Sorry there’s no print edition of the Free Press on sale today. We are working towards a return as soon as possible. Stay safe and well.”

The paper told HTFP it will retain a limited presence on social media, but said any changes made to staffing as a result were confidential.

The Times – which runs editions covering Coalville, Ashby-de-la-Zouch and the nearby Derbyshire town of Swadlincote – revealed its decision via Facebook last week in a statement which said: “Due to coronavirus outbreak, the decision has been taken for the Times to stop publishing for a minimum of three weeks.”

It added: “This means that this is the first time a Times newspaper has not been printed since the first publication in September 1893. We hope to start publishing again as soon as COVID-19 has been defeated. We ask all our readers and customers to stay safe during these challenging times.”

And the Review posted on its website: “Our community is at the heart of our newspapers, and we hope you all keep safe in these unprecedented times. It is with great reluctance that we have decided to temporarily suspend the Review due to COVID-19 restrictions.

“We are very sorry for any inconvenience, but we think it is necessary for the time being – we must all play our part to be safe and stay safe.

“You can continue to find out all the news and information in our sister newspaper The Forester, where our staff are continuing to work hard to ensure you are kept up to date with what’s happening in our villages and towns.”

Tindle has previously suspended publication of the six-edition Glamorgan Gem series, along with other changes which has seen its titles which are continuing cover broader regions together.

A spokeswoman for Reach Plc said: “Reach Plc has not suspended any publications further to the five free titles announced last week. There will be some temporary changes to edition structures due to the current pandemic.”

Previously JPIMedia had suspended publication of eight of its free titles, Northern Ireland’s Spectator group had put three on hold and the Midlands News Association did the same to all of its free titles including Chronicle Week, the Shrewsbury Chronicle and Telford Journal.

Northern Irish weeklies the Newry Reporter, Banbridge Chronicle and The Examiner have also made the same move.