The country’s longest-serving editor has been honoured for his services days after retiring from a weekly newspaper.

Ian McCormack, who edited the West Highland Free Press for 44 years before his retirement on 31 January, was presented with a Special Recognition Award at Friday’s Highlands and Islands Media Awards.

It was a night of celebration for the Free Press, with reporter Keith Mackenzie also being named Diageo Journalist of the Year and winning the Jim Love Memorial Trophy for Reporter of the Year at the ceremony, held in Inverness.

Keith was chosen by judges for his “strength of writing across a number of disciplines, including news, features and sport”. 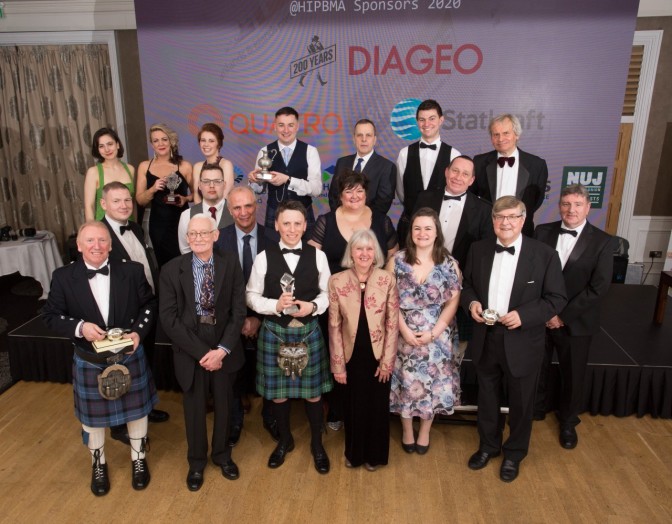 The winners at this year’s awards ceremony

“His work is consistently of a very high quality and contributes hugely to the excellent service the West Highland Free Press provides to its readers.”

Journalists from the recently formed Highland News and Media Ltd picked up four honours – Callum Mackay, Photographer of the Year, Eric Cormack, Top Shot of the Year, Louise Glen, Top Story of the Year, and Val Sweeney, Feature Writer of the Year.

Aberdeen Press & Journal journalists Chris Maclennan and Andy Skinner retained their Young Journalist of the Year and Sports Reporter of the Year titles respectively, while their colleague Stan Arnaud picked up the newly introduced Top Business Story of the Year award, sponsored by Inverness Chamber of Commerce.

Shona Macmillan, who works for the community newspaper Fios, in North Lewis, won the Bòrd na Gàidhlig award for Best Use of Gaelic, while the Best Use of Digital Media category was won by the Stornoway Media Centre.

Iain Grant, the former editor of the Caithness Courier and John O’Groat Journal, received the Barron Trophy for lifelong achievement in journalism.

A Special Recognition Award was also presented to the Orcadian, last year’s Newspaper of the Year, who used their £500 prize money to set up the Outreach4CLAN campaign which raised £22,786.07 for an expansion of vital charity services in Orkney — more than double what the appeal set out to achieve.

The full lsit of winners is as follows:

Sports Reporter of the Year
Andy Skinner, Press and Journal

Newspaper of the Year
Shetland Times