A regional publisher is launching a new weekly to serve a patch where an independent newspaper is threatened with closure.

The Herald revealed a fortnight ago that it had gone into voluntary administration after 160 years of publication, with six members of staff made redundant as a result, although the paper has continued to publish as normal during the process.

Newsquest says it intends to create new jobs in Penrith, where the Herald is based, to add to its existing reporting team of 34 in Cumbria.

But the Herald has hit back at its new rival’s launch, with the administrators saying a number of offers have been received for the business. 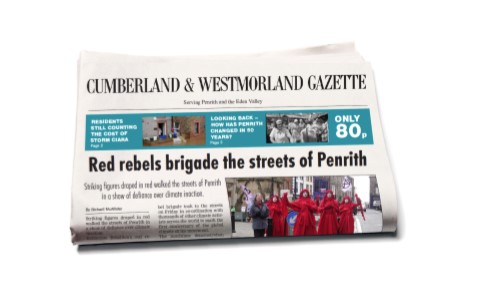 Newsquest Cumbria group editor Vanessa Sims said: “I am delighted to be bringing this new title to Penrith and the Eden Valley. This paper will be a stable-mate to our award-winning Cumberland News and the Westmorland Gazette.

“I’m sure readers will be impressed when they see what the new Cumberland & Westmorland Gazette has to offer in print and online.”

The first edition of the Cumberland & Westmorland Gazette, which has a cover price of 80p, is to be published this Friday, while a companion website will also go live.

Newsquest says those who purchase the Gazette’s inaugural edition will receive a free copy of its Cumbria Life magazine.

David Coates, Newsquest Cumbria’s managing director, said: “Nobody understands Cumbria better than the team behind the launch of this new title and website, and the Cumberland & Westmorland Gazette is a natural extension of our coverage in Penrith and the surrounding area.

“It is essential that Penrith and the Eden Valley continues to benefit from its own newspaper and local news website.

“The uncertainty over the future of the Herald is causing concern to the newspaper’s staff, and the wider community, and Newsquest Cumbria is pleased to step in to help.

“We’ll be creating new jobs in Penrith, adding to our existing team of 34 reporters on the ground in Cumbria, and there are also opportunities for advertising specialists to join our team too.”

Announcing it had entered administration earlier this month, the Herald revealed two further editions of the paper were set to be published while administrators Howard Smith and David Costley-Wood from KPMG’s restructuring practice explored a potential sale of the independently-owned business.

HTFP understands the Herald, which publishes on Saturdays, is set to run at least two further editions in addition to those while the process continues.

in response to the Gazette’s launch, editor Emily Atherton said on the Herald’s website: “Myself and the staff at the Herald are committed to keeping this newspaper going and remaining at the heart of your community.

“We continue in our fight to preserve the Herald and need the support of our readers and advertisers now more than ever.”

Joint administrator Howard Smith said: “From the outset of our appointment, we have been struck by the sheer strength of affection for the Herald. It really is a cornerstone of the local community with a proud and longstanding heritage.

“We’re therefore pleased to say we’ve received a number of offers for the business and have continued to publish the paper to allow ongoing discussions with interested parties in the hope of achieving a positive outcome.”