Six jobs have been lost and a further 20 are at risk after a weekly newspaper went into voluntary administration after 160 years of publication.

The Cumberland and Westmorland Herald has announced its future is “hanging in balance” after its directors appointed joint administrators.

The Herald employs a total of 26 members of staff at its Penrith office, pictured below, with six being made redundant immediately following the administrators’ appointment.

Two further editions of the paper will be published while administrators Howard Smith and David Costley-Wood from KPMG’s restructuring practice explore a potential sale of the independently-owned business. 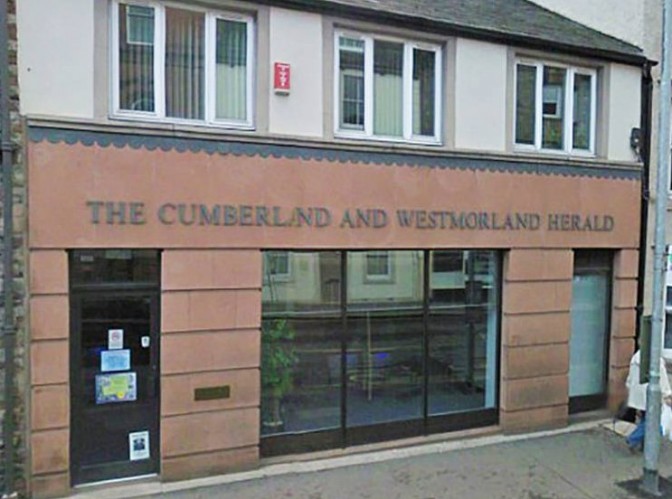 Mr Smith associate partner at KPMG, said: “The Herald has been a cornerstone of the community in East Cumbria for over a hundred years.

“Unfortunately, however, an increasing deficit in the company’s defined benefits pension scheme, in addition to the longstanding pressures facing the regional print media industry were behind the directors’ difficult decision to place the company into administration.

“Our intention is to continue to trade the business for a short period while we explore options for a possible sale.

“During this time, we anticipate that two editions of the newspaper will be published under the direction of the editor.”

The Herald, a weekly broadsheet, was established in 1860 and serves ares including Penrith, Appleby, Kirkby Stephen, Keswick and Alston.

The announcement comes less than five months after long-serving former editor Colin Maughan stepped down after 24 years in charge.

He was succeeded by his deputy Emily Atherton who became the first female editor in the paper’s history.