A new food bank warehouse has officially opened thanks to a weekly newspaper’s campaign.

HTFP reported in January how the Chorley Guardian raised more than £20,000 in just six weeks to help pay for a new food bank in the Lancashire town, after editor Nicola Adam had been “shocked” by the cramped and unsuitable conditions while visiting the previous facility from which it was being run.

A total of £30,000 was eventually raised through the #ProjectFeedChorley campaign, and the new warehouse has now been officially opened.

Both Nicola and reporter Tom Earnshaw, who led the campaign, attended the coffee morning launch on Monday, which provided a splash for the Guardian the following day. 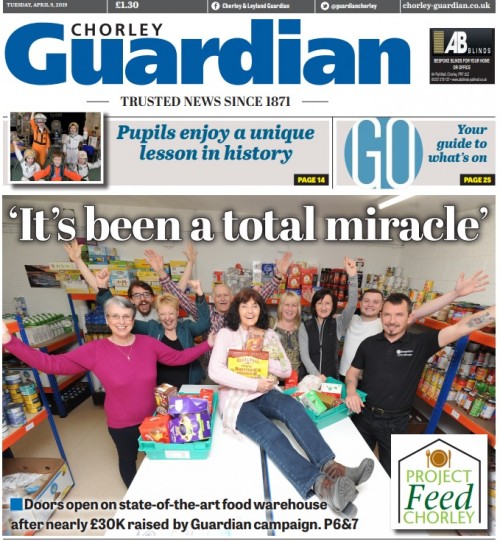 Said Nicola: “In tough times for newspaper brands, it really is heartwarming to see we still have the power to make a difference and the food bank really is an amazing place and the product of so many people’s generosity.

“The new building is such a massive upgrade from the damp, mouldy, cellar which you had to enter down steep stairs and then stoop under low ceilings. Now the volunteers who spend hours in there will be working in far more appropriate conditions. This was a real community effort and we thank everyone who got involved, you are amazing.”

At the time the campaign was launched, volunteers at the food bank were struggling to cope with demand after referrals to jumped from around 70 to 90 a month to more than 260 largely due to problems with the Universal Credit roll out.

After the Guardian started the appeal, food donations went through the roof in the run up to Christmas.

Carl Halton, co-ordinator at the LW Storehouse, said: “We have been overwhelmed with the response from the people of Chorley, they have been so generous and caring.

“Every penny has gone to the project. Whether people gave £10 or £2,000 it has all gone into that building.”