A weekly newspaper is bidding to build a new base for its local food bank, after revealing the current one operates out of a “damp and smelly” cellar.

The Chorley Guardian is aiming to raise £20,000 for its ‘Project Feed Chorley’ campaign, launched after editor Nicola Adam admitted she was “taken aback” when she saw the cramped and unsuitable conditions in which volunteers are currently required to sort and organise food.

More than a hundred families each month rely on help from the LW Storehouse at Chorley’s Living Waters Church.

The campaign is being run with Chorley Football Club and community radio station Chorley FM, on which Nicola also presents a weekly programme. 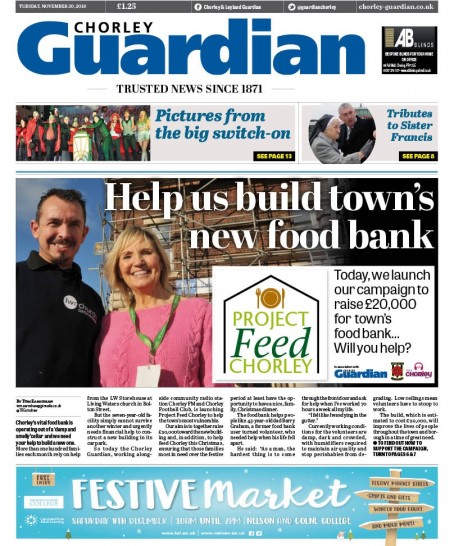 The campaign is being led editorially by reporter Tom Earnshaw and was launched on the Guardian’s front page on Tuesday.

It featured an interview with food bank user turned volunteer Barry Graham, who told how he found himself in need after a marriage breakdown saw him forced to give up work to look after his three very young children.

Nicola told HTFP: “Let’s be honest, it only takes twist of fate for any us find ourselves needing help and many of those who need the food bank have worked all their lives and found themselves in difficulty due to no fault of their own.

“The Storehouse and its army of volunteers is doing a fantastic job but when I had to stoop down steep steps, then crouch down in the low basement where humidifiers are working 24-hours a day to combat the damp, I knew we had to help them.”

It is hoped the money will be raised via crowdfunding and series of ticketed events.

For information on how to donate to the campaign, click here.