A weekly newspaper has raised more than £20,000 in just six weeks to help pay for a new food bank in the town it serves.

The Chorley Guardian has smashed the fundraising target for its ‘Project Feed Chorley’ campaign launched in November.

The campaign was prompted after a visit to the food bank by Guardian editor Nicola Adam, who was “shocked” by the cramped and unsuitable conditions from which it was being run.

The Guardian was joined in its drive, which has been led by trainee reporter Tom Earnshaw, by Chorley Football Club and community radio station Chorley FM, on which Nicola also presents a weekly programme. 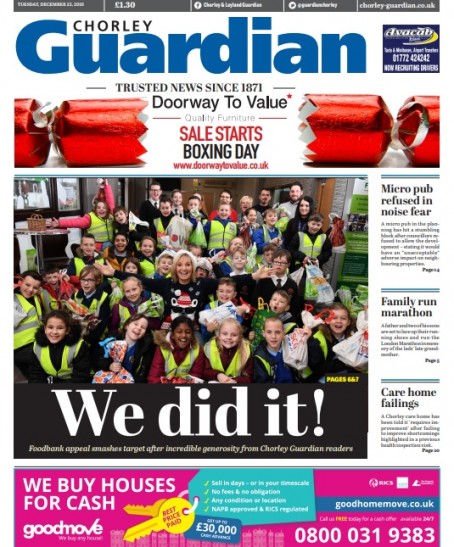 The paper splashed on the appeal’s success in its Christmas edition, but Nicola said: “We deliberately didn’t use the word ‘Christmas’ in the launch of this campaign as we fully anticipated the fundraising to roll into the new year. But we were amazed with the generosity of the people of Chorley who rose the challenge to help those who may need help.

“Not only did we raise the money very quickly but donations of food and other items tripled. Staff and volunteers have been amazed.

“So a massive thank you to all individuals, businesses, organisations and schools who got involved and donated. You are all wonderful and will make a big difference going forward.

“On another note, it is fantastic to see that small local newspaper brand can make a difference and remain an integral part of their community during challenging times for media.”