A regional daily has run a special edition to mark 100 years of its patch’s top football club.

To mark the occasion, the YEP launched a campaign calling for the club’s most successful manager Don Revie to be given posthumous civic recognition, along with the players who he managed.

Trevor Cherry, who served as captain under Mr Revie, was among the former players interviewed by the newspaper as part of its celebrations. 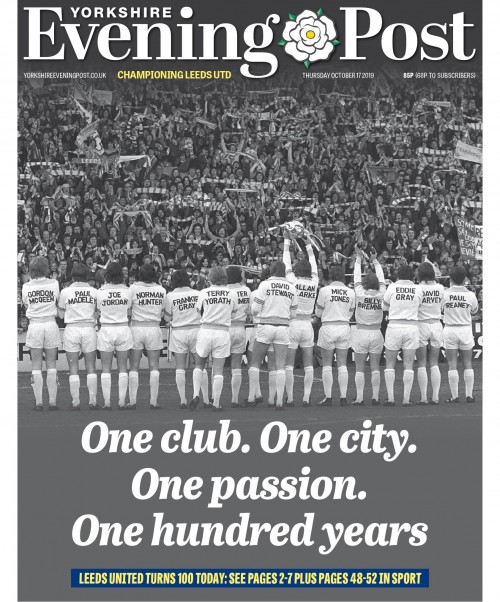 The YEP ran the special edition on Thursday

The special edition’s front page was revealed on Wednesday by Laura Collins, who used the same Twitter post to reveal she had been appointed as the YEP’s new editor following the departure of Hannah Thaxter.

It depicts the legendary Leeds United team of the early 1970s celebrating their League Championship win in 1974.

Laura told HTFP yesterday : “Leeds fans are passionate and they are the very fabric of what makes the club and the city so special. The Yorkshire Evening Post is the go-to-place for our unrivalled coverage of Leeds United and this was part of a whole package of coverage we planned over this special week.

“Last night our sports writers Graham Smyth and Joe Urquhart hosted a special live Q&A with Leeds legends Eddie Gray and Tony Dorigo in front of an audience of YEP readers. And we are going to culminate our coverage with a special 24-page supplement on Saturday.

“We’ve had readers from across the world in touch with us today to make sure they could get their hands on this unforgettable front page. It is certainly one that will go down in the annals of YEP history.”

“I’m absolutely delighted that by sheer co-incidence this historic moment would be my first front as editor of the YEP. And as the fabled Leeds United anthem states we will continue to March On Together with the YEP at the forefront of this city.”

Don Warters, who worked as the YEP’s Leeds United reporter for 29 years, was also interviewed by the role’s current holder Graham Smyth to mark the occasion.

Don said: “I went everywhere on the team coach, I stayed at the team hotel and had pre-match meal with them if I wanted.

“I made lots of friends, people at the club, players in particular and I got very close to most of them, especially [former captain] Billy Bremner.”