A legendary football team have been awarded civic honours thanks to a campaign by a regional daily.

HTFP reported in October how the Yorkshire Evening Post had called for Leeds United FC’s most successful manager Don Revie to be given posthumous civic recognition, along with the players who he managed.

The campaign was launched by the YEP to coincide with the club’s 100th anniversary, and Leeds City Council has now awarded the Honorary Freedom of the City of Leeds to those who played for the club in the late 1960s and early 1970s. 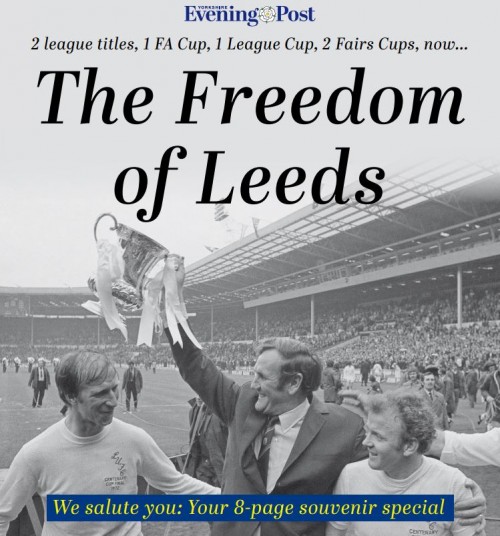 The YEP ran a special eight-page supplement on Wednesday to coincide with the honour being presented to surviving members of the teams, as well as representatives of those who have passed away.

Speaking to HTFP ahead of the ceremony, editor Laura Collins said: “Today the Yorkshire Evening Post and the city of Leeds are celebrating the achievements of Don Revie – and the footballing legends – who turned Leeds United into one of the biggest, and most famous, football clubs in the world.

“It is the first time that a team is awarded the Freedom of Leeds, the highest civic honour that can be bestowed, and quite rightly so. It is a fitting way to say thank you to the Revie boys and the game-changing role they played in the city’s wider story.

“The Yorkshire Evening Post is proud to have played its role – by championing the city and those who make it so special – in ensuring their legacy is recorded as part of Leeds’ civic history for generations to come.

“And today we have pulled together a special eight-page supplement to celebrate the history boys themselves as part of the YEP’s unrivalled coverage of the club at the heart of our proud city.”