The Impartial Reporter has spent the past nine months exposing an alleged historic child sex abuse ring in County Fermanagh, which has seen dozens of alleged victims tell their story to the paper.

The Enniskillen-based Reporter has also campaigned for police action on the alleged abuse, and the Police Service of Northern Ireland has now confirmed “a number of individuals” have now been arrested as part of its investigation.

Allegations have been made about more than 70 people dating back many decades. 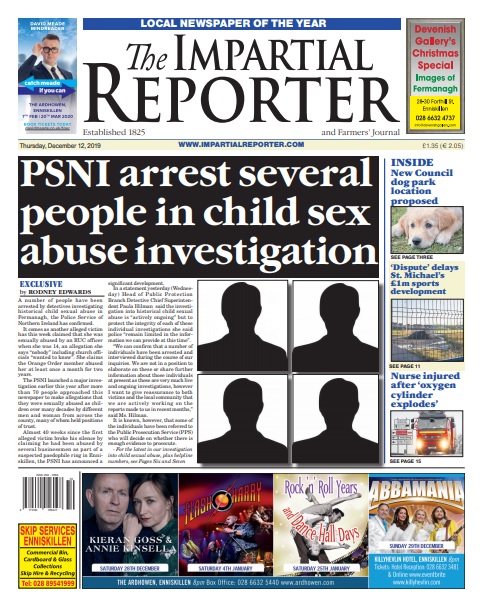 Some of the alleged perpetrators have since died, but many are still alive.

The arrests come after the Reporter published fresh revelations from a woman who claimed she was sexually abused by a serving police officer when she was 14, and subsequently had a church minister put the phone down on her when she told him she felt suicidal.

Reporter deputy editor Rodney Edwards, who has led the campaign, told BBC Radio Ulster yesterday morning: “This has been a major story in Fermanagh – and one that has resonated with many people across Ireland, north and south, and the UK.

“It’s a story essentially about decades of secrets, of hidden pain and torment, about children whose innocence was allegedly stolen by men and women – some of whom were highly regarded and respected – and still are – who abused their positions and abused that trust.

“There was bus driver David Sullivan – whose body was found in bogland in 2000 – who allegedly raped children on the way to school, and the deceased school principal John McElholm who it is claimed abused more than 20 girls in his office before sending them back to class.

“There have also been claims made against businessmen, clerics, childminders, members of the Orange Order and like today – police officers.”

He added: “It’s a scandal that is growing and growing and a story that isn’t going away. It has started important conversations across this island and has the potential to spark change.”

She said: “We can confirm that a number of individuals have been arrested and interviewed during the course of our inquiries.

“We are not in a position to elaborate on these or share further information about those individuals at present as these are very much live and ongoing investigations.”