A journalist whose investigation has seen dozens of alleged child sex abuse victims come forward has warned the “dark cloud” hanging over his patch shows “no sign of fading.”

Rodney Edwards, deputy editor of the Enniskillen-based Impartial Reporter, has spoken to more than 50 people who claim they were abused as youngsters by a paedophile ring operating in County Fermanagh.

Last week the Reporter splashed on fresh claims by two women that several members of the Orange Order sexually abused them as children in the 1970s, but nothing was done when it was subsequently reported.

Both Protestant and Catholic men, living and dead, have been accused of being involving in the abuse ring since Rodney interviewed the first alleged victim to come forward six months ago. 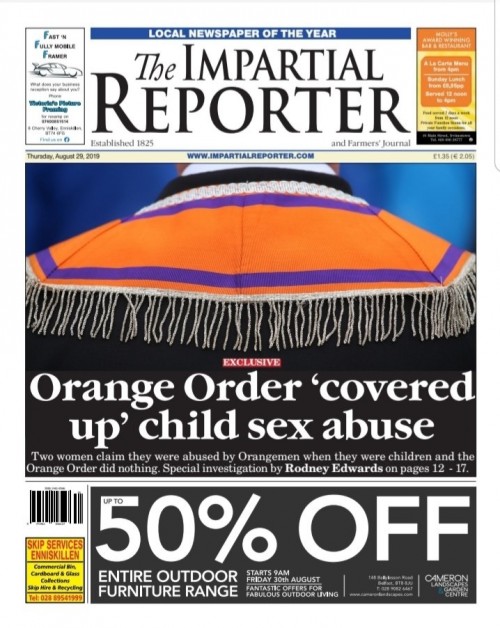 In a column for the Belfast Telegraph, Rodney wrote: “The dark cloud that has hung over Fermanagh in recent months shows no sign of fading, a bit like the pain that so many victims are faced with.

“It is not known if any of them will ever get justice or find closure, but what is evident from the huge public outcry is the level of support that exists like never before. No longer must any sex abuse victim remain silent.

“In the past six months I’ve been accused of ‘gutter journalism’ by a Fermanagh councillor. More recently a Fermanagh Orangeman and member of a unionist party who failed to get elected to government numerous times wrote on social media that I should be ‘taken down a peg or two’ and that I think I am ‘untouchable’.

More than 50 alleged victims have now made allegations against over 60 men as a result of the Reporter’s investigation.

Added Rodney: “This is a significant moment in Fermanagh as we delve deeper and deeper into a murky past that saw innocent children allegedly raped by evil men again and again and again. But these serious allegations would not have emerged had it not been for the bravery of victims.”

“They are speaking out because they finally have the confidence to do so and feel as if they are being listened to and believed.

“Uncovering the past in your own home county is challenging, but it is important. While I am heartened by the response of people in Fermanagh, there have been difficult moments too.”

In a statement, the Orange Order accepted that the allegations were “very serious” and added it “will fully co-operate with any Police Service of Northern Ireland investigation.”