A weekly newspaper has published its final edition after 97 years in print.

Trinity Mirror has confirmed the closure of the Ellesmere Port Pioneer following the “move to online news consumption”.

Stories about the Cheshire town will now be covered by TM sister titles the Chester Chronicle and Liverpool Echo, while a dedicated Facebook channel for the Pioneer will remain open.

The last edition of the paid-for Pioneer, pictured below, was published on 27 December. 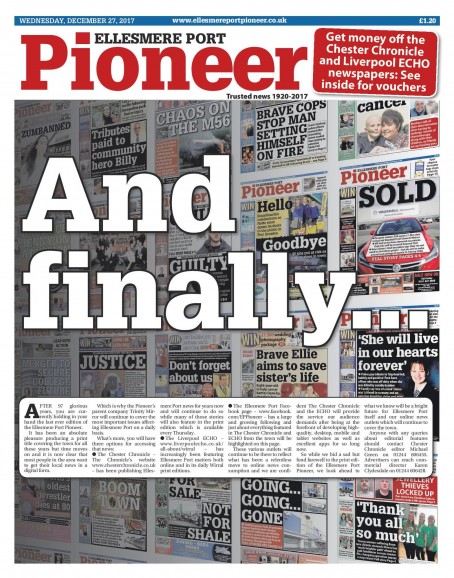 TM has closed a number of other weekly papers in recent months – including free titles the Surrey & Hants Star Courier, Bristol Observer, Bedfordshire on Sunday, the Ely News, Haverhill News and Newmarket News.

“The Pioneer has a long and rich history of brave, informative campaigning journalism on behalf of the people of Ellesmere Port.

“The move to online news consumption has been relentless though and we are delighted that the Chester Chronicle and the Liverpool Echo have been at the forefront of developing high-quality, desktop, mobile and tablet websites as well as excellent apps.

“The audience to those, and to the Pioneer’s Facebook page is growing fast and we are confident and determined that we will continue to provide first-rate coverage of Ellesmere Port in the manner in which readers and advertisers want to receive it.’’

No jobs have been lost as a consequence of the Pioneer’s closure.