A weekly newspaper is to close at the end of the month after its publisher decided it was “unsustainable.”

Trinity Mirror says the Surrey & Hants Star Courier will cease publication at the end of the month, following a review of its portfolio.

There are no job losses as a result of the closure, but HTFP understands five circulation roles are set to be reduced to three in the South-East of England as part of a separate move by TM.

The closure follows that of Get Hampshire, which was the companion website to the Star Courier and sister title the Aldershot News and Mail until it closed in July. 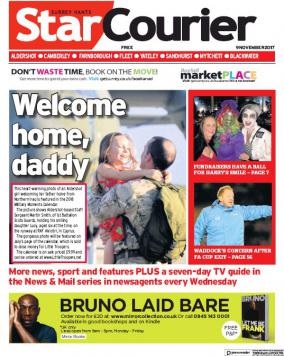 The Star Courier is the latest in a string of Trinity Mirror free titles to close in recent months, including the Bristol Observer, Bedfordshire on Sunday, the Ely News, Haverhill News and Newmarket News.

The move was announced to staff in a memo by Trinity Mirror South East, Central and East managing director Simon Edgley, which has been seen by HTFP.

It states: “We have, over the course of the last few months, been continuing to conduct a detailed review of our portfolio to ensure that we are best positioned to create sustainability and ensure we meet our strategic objectives.

“Following this review of our portfolio it has become clear that certain print titles have become unsustainable and as a result, the company is regretfully proposing to close the Surrey & Hants Star Courier.

“These markets will continue to be served by our Aldershot News & Mail series of titles. There are no job losses as a result of the closure. The last edition of the Star Courier will be 29 November.”

HTFP understand that three of the circulation staff at risk work at TM’s Guildford office, with two based in Tunbridge Wells.