A family-owned independent publisher which runs two regional dailies and five weeklies is set to be sold to Newsquest.

The Carlisle-based CN Group, which has been run by the Burgess family for four generations, says its board has taken the decision because it believes the group’s long-term future will be “better protected as part of a larger, scaled operation.”

The company also runs magazines Cumbria Life, Dumfries & Galloway Life, Carlisle Living and Taste Cumbria.  It sold its two radio stations, The Bay and Lakeland Radio, in the autumn of 2017. 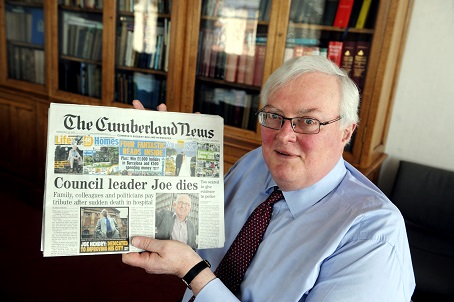 The deal represents the latest expansion for Newsquest which over recent months has purchased independent publisher NWN Media, as well as the Isle of Wight County Press.

The sale is expected to be completed next month after a meeting of CN shareholders on 9 March.

CN Group chairman Robin, pictured, said: “A member of my family has run this company for the past four generations so this sale is the end of an era and is tinged with sadness.

“However our ability to prosper as a medium-sized independent group, in light of digital and social media developments, has become increasingly difficult and it is clear that the challenges will only get harder.

“Faced with these and other issues, including the pension deficit, we came to the conclusion that a sale of the publishing business is the best way forward for all our stakeholders.

“We are confident that under new ownership the group’s titles and sites will continue to serve their communities as they have in the past.”

Chief executive Miller Hogg said: “It is vitally important for a local media company like CN to be part of a larger and committed regional media group like Newsquest. We still remain a local company with local brands serving the local community.

“This deal will provide certainty for our local staff for a sustainable future and with a media group capable of investing for the print and digital world we live in.”

Newsquest chief executive Henry Faure Walker added: “We look forward to the opportunity of working with the CN Group, its staff and the community it represents in building on their great local brands and publishing expertise, and helping them forge a strong future.

“We will endeavour to support them with the scale and resources that Newsquest can provide, whilst enabling them to carry on what they have done so well for many years – namely providing first class content and advertising solutions for the people and businesses of Cumbria and the wider region.”