An independent newspaper has been launched in a town which lost its dedicated weekly title two weeks ago.

The first edition of Beverley Life hit the streets yesterday, after being set up following the closure of Trinity Mirror’s Beverley Advertiser the week before Christmas.

The monthly free paper has been launched by Driffield & Wolds Weekly founder Andy Stabler and will circulate in Beverley, Cottingham and their surrounding villages.

Andy, 41, founded the Weekly in August 2015 after taking voluntary redundancy from Johnston Press, where he served as sports editor at the Driffield Times & Post. 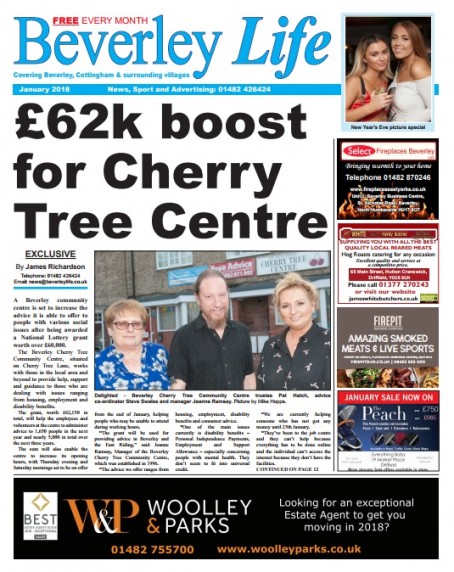 The first edition of Beverley Life

The Times & Post was closed by JP in August 2016 along with the Beverley Guardian, which had left the Advertiser as the only dedicated newspaper in the Yorkshire town.

Andy told HTFP. “We had been looking at Beverley for a few months, but when news of the Advertiser broke we decided January was the time, as the town really does need a newspaper, and what better way to start the New Year.

“It really will give many a lift in the town. In just a month our dedicated team have produced a stunning 48-page paper with 70pc news content, with no press releases featured so much was the desire of our advertising reps, reporters and photographers.

“It’s been a real team effort from everyone and I can’t thank the staff enough, as well as the people of Beverley, they have been so supportive and we’ve made some great connections with some brilliant advertisers. Everyone has really got on board with what we are looking to achieve.”

Andy currently has nine staff members, with one of them, an advertising representative, taken on specifically for the launch of Beverley Life along with an extra part-time freelance photographer.

Andy was among those delivering the new paper across Beverley yesterday and, while it does not have a dedicated office in the town, he said office space is currently being sought there and staff would be “on the ground” in the meantime.

He added: “People will find it hard to believe it’s free. I have never seen a free paper of this quality, and I have seen dozens of them. Within three months we expect to have a print run close to 20,000 copies.

“Our Driffield paper continues to be a success, with sales higher than this time last year, and our relationship with advertisers continues to grow.”