A weekly newspaper formed from a merger of two sister titles last year has closed in a regional publisher’s cutbacks.

The Walsall Advertiser and Great Barr Observer has ceased publication following a restructure which has seen a number of journalists who work on the paper leave Trinity Mirror.

TM amalgamated the Advertiser and Observer into a single product last year, but the National Union of Journalists reported in February that the paper’s future had been placed at risk as part of wider cutbacks.

The company has confirmed the last edition of the Advertiser and Observer was published last week. 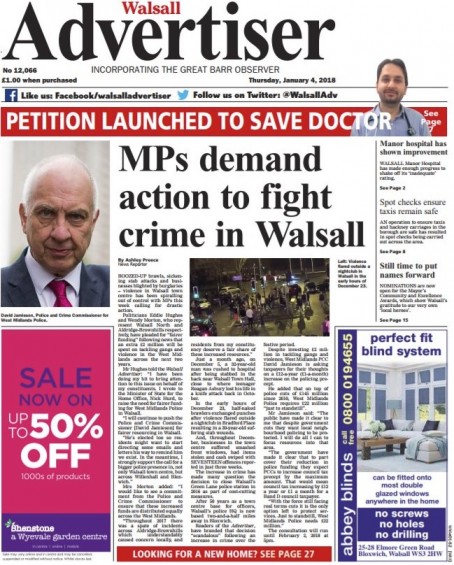 “Thank you for your service to Walsall people over many decades and we will miss you popping through our letter box every week.”

The paper was published by TM’s Central Independent News and Media division, and up to 11 editorial jobs were reported to be at risk as a result of the cuts – brought about as part of the company’s introduction of its new ‘Live’ newsroom model, which could see almost 100 jobs lost across the country.

TM declined to reveal how many roles have been lost at CIN, based in Tamworth, but the company said there had been no compulsory redundancies as a result of the Advertiser and Observer’s closure.

It was previously confirmed that Gary Phelps, who served as editor-in-chief of the paper, as well as Tamworth Herald, Nuneaton News, Royal Sutton Coldfield Observer and Lichfield Mercury, would be among those leaving his position.