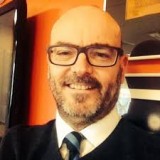 Two flagship dailies are set to come under the same publishing unit after a regional publisher’s restructure which has seen a managing director depart.

The move sees Carl Wood, who is the MD responsible for the Liverpool Echo, as well as Reach’s North West and North Wales titles, add the MEN and the Examiner to his portfolio.

Paul, pictured, joined Reach in 2010 as commercial director of the Manchester Evening News.

He had been managing director of the MEN and Huddersfield Examiner since November 2014.

HTFP has asked Reach for a comment on Paul’s departure.