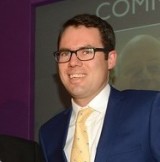 A former daily editor who helped set up a new county-wide website last year is moving to a police public relations role after 18 years in journalism.

Patrick Phelvin, left, has resigned as editor of the Devon Live website as he prepares to take on the role of head of communications for the Office of the Devon and Cornwall Police and Crime Commissioner.

Patrick was the founding editor of Devon Live, set up by what was then Trinity Mirror, in February last year.

Prior to that, he edited the Exeter Express & Echo – the newspaper he first joined as a reporter 18 years ago.

He was also editor of the Mid Devon Gazette series during the course of his career with the publisher and its predecessor companies Northcliffe Newspapers and Local World.

Said Patrick: “I have enjoyed a wonderful career working in the news industry and count launching DevonLive.com as one of the high points of my career.

“Although the time is right for me to move on to a new challenge, I feel the editorial team in Devon and Cornwall is extremely well placed to take on the challenges of a digital age.

“I’ll miss the cut and thrust of the newsroom and working with some immensely talented journalists and wish the team all the best for the future.”

Patrick took on Devon Live as part of a move which saw him solely work on the website, while Torquay Herald Express editor Jim Parker took on responsibility for TM’s associated print titles.

Patrick’s last day in the business will be 8 June, and until then he will be working on some specific projects for the Devon print portfolio of Reach, the new name for Trinity Mirror.

He will be replaced by Devon Live’s current head of content Richard Booth.

Bill Martin, Reach’s Devon and Cornwall editor-in-chief, said: “Paddy is a top quality journalist who has always had a hunger for a good story.

“His work in the launch of Devon Live was exemplary and we shall miss his support and his sense of humour.”