Review of 2017: The year in regional journalism

For years, each time a major national news story broke, there was at least one regional newspaper that invariably managed to provide on-the-day print coverage.

And sure enough, when Grenfell Tower went up in flames in the early hours of 14 June, long after most of the UK’s other regional dailies had been put to bed, the Oldham Evening Chronicle still got the story on its front page that day.

Alas, it proved to be a last gasp from the 163-year-old title, which had continued to print on the day of publication in defiance of the industry-wide move to overnight printing.

Ten weeks later, its parent company Hirst, Kidde and Rennie went into administration and the paper closed with the loss of 49 jobs. 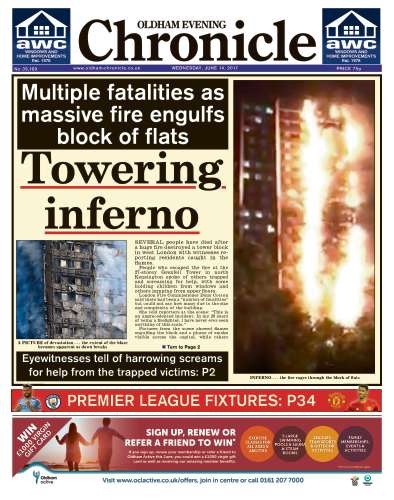 Thus the Chronicle became the highest-profile casualty of another year of high turnover in the regional press industry which saw titles opening and closing and editors coming and going.

The Chronicle may yet live to fight another day under its new owners, Revolution 96.2, but for some, 2017 was truly the last post.

The Wirral News, Bristol Observer, Newmarket News, Haverhill News, Canterbury Times, Whitstable Times, Beverley Advertiser and Prestwich and Whitefield Guide were among the weekly newspaper titles that rolled off the presses for the last time this year.

And two Sunday titles launched in a wave of optimism in the 90s and 00s also reached the end of the road – Kent on Sunday and Bedfordshire on Sunday, whose departing editor Sarah Cox broke with the customary purdah around closure decisions by branding it “unfathomable.”

On the plus side, the closures were at least partially mitigated by some new arrivals, with a resurgent Iliffe Media building on its successful launch of the Cambridge Independent in 2016 with a new sister title in Bishop’s Stortford.

And Newsquest moved swiftly to plug the news vacuum in Oldham following the Chronicle’s closure with the launch of the Oldham Times.

The battle for readers in the North West town swiftly became a three-way contest with the Manchester Evening News launching an Oldham edition and a new independent hyperlocal, the Oldham Reporter, also joining the fray.

And in perhaps the most ambitious new launch of all – albeit an online-only one – Trinity Mirror ventured into the heart of rival Johnston Press territory with news website Leeds Live.

Trinity had begun the year with a major overhaul of its regional operation with the loss of 78 roles and the creation of 44 new ones as part of a move to regional print production teams.

The company’s drive, begun in 2016, towards a digital-first publishing model with county-wide web platforms continued with the move of Gloucestershire dailies the Citizen and Echo to weekly publication, with online channel Gloucestershire Live handling breaking news.

Other high-profile editors who bowed out during the year included Dave Helliwell (News & Star, Carlisle) and Terry Hunt (East Anglian Daily Times) who briefly became the longest-serving daily editor in the regional press after the previous title-holder, Perry Austin-Clarke, brought his 25-year stint at the Bradford Telegraph and Argus to a close.

Perry was one of six Newsquest daily editors to move on  year along with Ian Murray (Southern Daily Echo), Gary Lawrence (Oxford Mail and Swindon Advertiser), Peter John (Worcester News) and the two Graemes (or Grahams) in Glasgow.

Ian was not out of the limelight for long, however, swiftly resurfacing in another major industry role as the new executive director of the Society of Editors after long-time incumbent Bob Satchwell was forced to retire on the grounds of ill-health.

Another of the industry’s great survivors, Neil Benson, stood down as Trinity Mirror’s regional editorial director to make way for his erstwhile deputy, Alan Edmunds, and now has a new role chairing the Editor’s Code Committee of press watchdog IPSO.

The closing months of the year saw Johnston Press chief executive Ashley Highfield defy, at least for now, an attempt by leading shareholder Christen Ager-Hanssen to replace him with former Local World boss Steve Auckland, while a series of apparently local budgeting decisions at Newsquest titles led to around 36 editorial job losses across the group.

But if the Grenfell tragedy, and the fact that the safety issues with the block had previously gone unreported, had highlighted the ‘democratic deficit’ in local communities arising from local press cuts, the new ‘Local Democracy Reporter’ project in partnership with the BBC heralded a possible way forward.

December’s announcement of contracts to employ the 144 new reporters led to a sudden glut of new jobs in what had otherwise been a somewhat gloomy autumn for the industry.

And while there remains some scepticism over exactly how the scheme will operate, it did at least ensure that 2017 ended on a note of optimism.