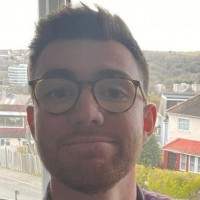 A regional journalist known for his investigative work is set to join a national newspaper.

Connor Stringer has announced he will be leaving Brighton daily The Argus after almost two years to take up a new role with the Daily Mail.

Connor, pictured, has been involved in running a number of investigations during his time at The Argus, often with fellow reporter Jody Doherty-Cove.

The pair have uncovered a ‘sex for rent’ scandal and the attempted sale of historic lights in recent years.

Connor, who trained at Bournemouth University before joining the Newsquest daily in 2020, has also recently run a series of investigations into the sale and use of drugs including Rohypnol and cocaine, as well as online scams.

Speaking to HTFP, he said: “April will mark the end of a fantastic two years with The Argus.

“A paper driven to produce quality journalism, I leave behind a talented team of reporters who will continue to expose wrongdoing in the community.

“I’d like to thank editor-in-chief Arron Hendy, Adam Smith and Kate Parkin for their steadfast support and leadership during that time.

“I look forward to joining the fantastic team at the Daily Mail and continuing to hold power to account at a national level.”