A reporter was threatened with assault and branded “the enemy of freedom” after confronting a coronavirus denier exposed as the man behind a ‘sex for rent’ advert.

Connor Stringer was subjected to the threats by the man, who also attempted to grab the phone of Jody Doherty-Cove, Connor’s colleague at Brighton daily The Argus, as they quizzed him about the online ad.

Connor had posed as a 19-year-old woman online after being made aware of the advertisement and agreed to meet the man, known only as ‘Gary’, at Worthing railway station.

‘Gary’ had offered free rent to women, who may have lost their jobs during what he called the “scamdemic”, in exchange for sex, and denied any wrongdoing when subsequently confronted by Connor and Jody at the station. 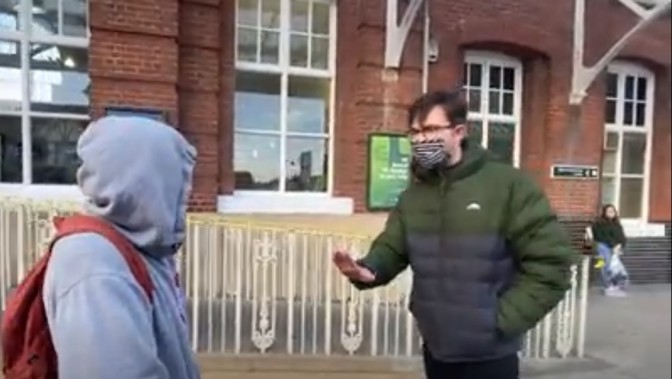 In a video of the incident, ‘Gary’ can be seen attempting to grab Jody’s phone and threatening to “grab” Connor before dubbing him “the enemy of freedom”.

HTFP reported on a similar exposé run by Connor and Jody in December during which they were threatened and their car keys were snatched by a man they confronted for allegedly trying to sell historic lights which were removed for restoration.

Speaking to HTFP about the confrontation with ‘Gary’, Connor said: “The plan was in place and there was a long discussion about safety after myself and Jody did one not so long ago.

“We learnt our lessons from [the previous confrontation] and were sure there were appropriate plans in place by getting there early to get a sense of the area in case something did go wrong.

“It would have been easy to get caught up in his rhetoric about being the ‘enemies of freedom’ but we kept asking him the probing questions about the issue.

“He was very confrontational and arguably quite threatening.”

Connor went on to praise the editorial department of The Argus for giving the investigation the green light.

He said: “That’s the beauty of The Argus. We’ve got the flexibility and the enthusiasm to do these kind of things.

“It’s something we’re working on doing more going forward and not something that’s ever shut down.

“We plan to do more in the future, it’s just a matter of finding the stories.”

Connor added: “It’s had quite a lot of reaction which is good when it comes to social issues and that’s something we’re trying to press on.

“Readers seem to very much value the content and hopefully along the line the story develops.”

HTFP has approached Sussex Police for a comment on the incident.