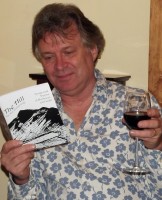 A former editor has compiled a book of football chants dating back more than half a century.

Nic Outterside has recorded the archive of songs sung by fans of Brighton & Hove Albion.

He has since written two books about the team, Death in Grimsby and Wet Socks and Dry Bones.

Nic, pictured, said: “These two books were both heavily researched factual narratives. But while writing them both, the sights and sounds of watching the Albion were never far from my subconscious thoughts.

“I still remember the impact the chants that erupted – usually emanating from the North Stand at the Goldstone Ground – had on me as a young fan.”

Nic’s book of chants, ‘Paper Seagulls – Songs and Poems from the North Stand’, is supplemented with a few longer poems about the club he has written.

He added: “Anyone who has ever been to a football match will know that the language you might hear in the stands or terraces is not one you would utter in Boots the chemist, in church or indeed in front of your children.

“The words contained in this book are raw and sometimes offensive, but they are true to the game.

“So, after a lot of soul-searching Paper Seagulls is uncensored, and I have attached a Parental Advisory Explicit Content label to the book’s cover.

“I have however, drawn a line in the sand against using anything which is racist, antisemitic or homophobic – although you will find a few of our humorous chants which counter the homophobic abuse we sometimes hear on our travels.”