A former editor has written a second book about his favourite football team after the death of his boyhood hero.

Nic Outterside’s Wet Socks and Dry Bones examines the lives of 50 Brighton & Hove Albion footballers who played for the club at its former Goldstone Ground home, prior to its demolition in 1997.

Nic edited the Argyllshire Advertiser, Buchan Observer, Galloway Gazette and Denbighshire Free Press over the course of his career.

He has previously written another book, Death in Grimsby, about his time following Albion since his first game in 1967. 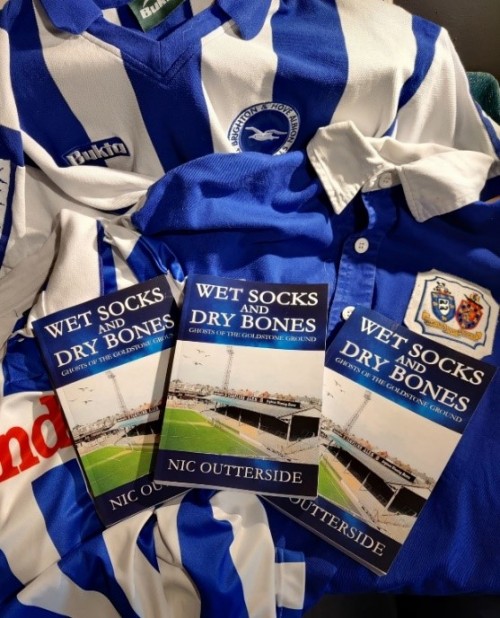 Nic said: “It was while finishing that book that the blinding flash of light took place, which led me here.

“The moment was Monday 1 April 2019… the day I heard the news that my boyhood Brighton & Hove Albion hero Kit Napier had died just 12 hours earlier at his home in Durban, South Africa, aged 75.

“There was a loud howl inside my head, as if part of my own life was gone.

“I was an impressionable 11-year-old kid in 1967 when I first saw Kit play, and for me, he was everything you wanted from a football hero… and like all childhood heroes, I thought he would live forever.”

The 300-page book, which can be bought here, sold more than 100 copies within 48 hours of publication.

Nic added: “Wet Socks and Dry Bones is my own subjective collection of 50 stories of some of the most outstanding players of the whole Goldstone era.

“But the book started to sell more briskly than I ever imagined and the demand for a Kindle e-book edition grew daily.

“So just 12 days after the paperback publication here is the Kindle edition.”