A former regional editor has written a book charting half a century following his hometown football club.

Nic Outterside has supported Brighton & Hove Albion since 1967, and has now penned ‘Death in Grimsby’ recalling his most memorable times watching the team.

Among 50,000 words and 115 images, Death in Grimsby is a collection of personal stories and each chapter is a separate story related to 21 different matches and events.

The title of the book refers to an incident in which Nic, who edited the Argyllshire Advertiser, Buchan Observer, Galloway Gazette and Denbighshire Free Press over the course of his career, was hospitalised with hypothermia after watching a match against Grimsby Town. 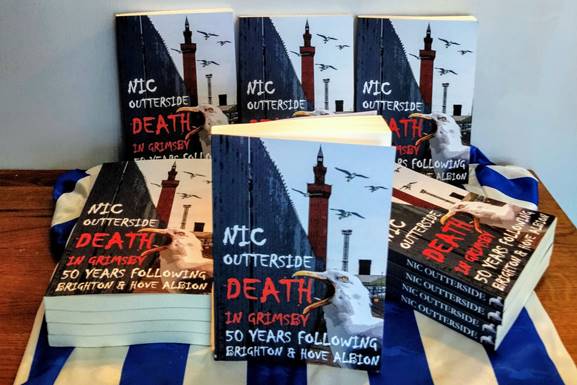 Said Nic: “I have been following my beloved Brighton & Hove Albion since I was a very small kid, and like a fan of any club, whether that be Arsenal, Accrington Stanley, Aston Villa or Alloa Athletic, once you are hooked you are well and truly hooked.

“My passion was conceived on a sunny Saturday afternoon in September 1967 when I was just 11 years old, as I stood wide-eyed at the front of the North Stand of the Goldstone Ground watching these huge men battle for a crisp, white football on the green turf before me.

“It is a passion which has never dimmed with greying hair, crows’ feet etched lines and a free bus pass just three years away.”

The book is available from Amazon, while a Kindle e-book edition of the book will also be available later in the summer of 2019.