A regional daily has declared “enough is enough” after launching a fight to save a football club from extinction.

The Derby Telegraph is campaigning to keep Derby County alive as fans face “gut-wrenching concern and deep-rooted worry” over the club’s future.

County have been in administration for four months but are currently unable to name a preferred takeover bidder due to two other clubs, Middlesbrough and Wycome Wanderers, pursuing legal claims against them, citing a loss of income due to financial rule breaches.

The team have already been placed under a transfer embargo and docked 21 points over the breaches. 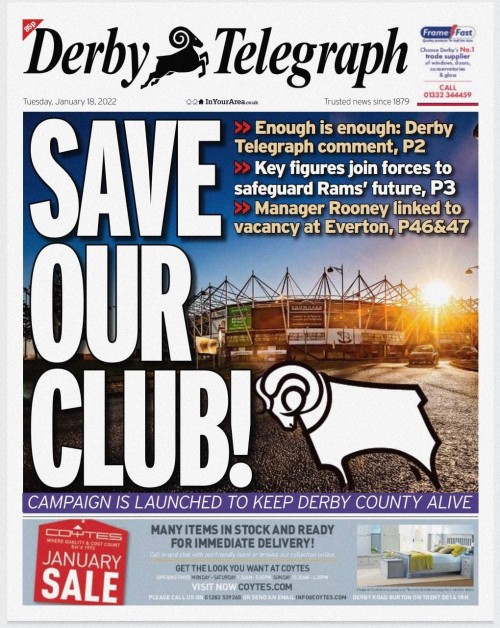 The Telegraph has splashed this morning on the campaign’s launch, pictured above, and demanded answers to five questions from the English Football League over the situation.

The newspaper questioned why the rival clubs’ compensation claims have been given credibility, why the Rams are not being allowed to seek exit from administration with the same protection from legal action as other companies in similar situations and why the EFL is not doing “everything in its power” to keep the club in business.

The Telegraph also question whether Derby will be kicked out of the Football League unless they show that funds are in place to complete the season by 1 February and what the EFL would say to fans “who are worried that the team they have supported for generations could now face extinction”.

A petition demanding the Minister for Sport looks into the ongoing situation at County has more than 40,000 signatures.

The Telegraph said in an editorial: “Enough is enough. The uncertainty, the gut-wrenching concern and deep-rooted worry over the future of Derby County Football Club has gone on for far too long. And it is you, the loyal supporters, the fans who turn up week in and week out to roar on the team, who are suffering most.

“Owners, managers and players come and go, but the fans are the consistent theme. This is your club, our club, the city’s club, the county’s club.”

“All clubs are absolutely vital to their communities. Derby County was formed in 1884, is 138 years old and is a founder member of the Football League.

“It is a club rich in history, a club worth fighting for.”

In a lengthy statement issued last night, in which the EFL responded to some of the Telegraph’s concerns, the league said it was “keen to try and resolve the current impasse”, adding it would “continue to work proactively with the administrators and relevant stakeholders to find a process which will give clarity quickly”.