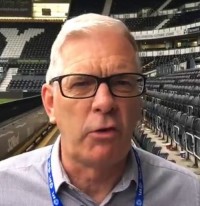 A sports journalist has left a regional daily “with a heavy heart” after almost four decades’ service.

Chief football writer Steve Nicholson has announced he is leaving the Derby Telegraph, where he has covered Derby County Football Club for 37 years.

Steve, pictured, described leaving the Telegraph as “one of the hardest decisions I have ever had to make in my life”.

His departure comes poignantly as County prepare to play in English football’s third tier for the first time since the 1985-86 season, when he first began covering them.

In a farewell piece, Steve wrote: “I have decided the time is right to leave the Derby Telegraph and Derbyshire Live after 37 years.

“This has been one of the hardest decisions I have ever had to make in my life and I do so with a heavy heart and emotion that has overwhelmed me because it has been a privilege and an honour to cover Derby County down the years, first as number two to my late colleague and friend Gerald Mortimer, and then for 1,016 consecutive games since becoming chief football writer in 2002.

“I have not added up how many games in total I’ve covered but what I do know is that I have worked with and alongside some immensely talented journalists.

“I never professed to be the finest of writers but I set out to be dedicated and thorough. I gave my all each day, each game. This has been a huge part of my life and a journey I will never forget.”

His departure comes after County were relegated after entering administration, with the Telegraph campaigning to keep the club afloat.

Steve went on to thank the club’s fans, managers, players, staff and officials from his time at the Telegraph, having marked his thousandth consecutive game reporting on them earlier this year.

He wrote: “The role of a football writer has changed markedly over the years and the emergence of social media has brought new and different demands, but certain important fundamentals remain and one of those fundamentals is building a relationship with the manager of the club you cover, an important part of the job because trust and respect is not a given, they have to be earned.

“I would like to think if I rang any manager I have worked with over the past 20 years they would all either answer or get back to me.”

“I have been asked what covering Derby County has meant to me. I picked up the baton from Gerald Mortimer, whose finely-crafted words and considered thoughts fed the fanbase through many of the club’s greatest days. Gerald was a tough act to follow, but I gave it my best shot.

“How much the job meant to me hit home during the coronovirus pandemic. I was furloughed for two or three weeks, as many in the workplace were, and received a lovely message from the daughter of an elderly Rams fan living on the other side of the world saying how sad her father was to hear I had been furloughed and how he would miss my reports. I shed a tear.”

Telegraph owner Reach plc’s head of football Steve Wollaston has been among those to pay tribute to Steve, highlighting his “gravitas and authority that can only come with that experience”.

He told HTFP: “Respected by his colleagues, and held in very high esteem by all in the footballing world, I have found Steve to be a good source of wisdom and good advice.

“Always on the ball, whatever time of day, dedicating his life to reporting the latest news for the Rams fans.

“Steve has always been a consummate professional, changing with the times, adapting to an industry going through monumental changes over 20 years, and always ready to roll his sleeves up.

“I know he will secretly miss his Q&A sessions with fans, some of which had been known to go on for three hours.

“It’s been a long and illustrious career, and I would like to put on record the company’s thanks for everything he has done over the years.

“Nico will quite rightly face a weekend of people singing his praises, wishing him well and paying tribute to the job that he has done. Quite right too.

“I’ve asked Steve what his next step is, his answer was: ‘For a while, nothing at all.'”