A weekly newspaper has hit out at the Liberal Democrats after the party launched a new “free” title on its patch.

The Northampton Chronicle & Echo has warned its readers about the Northants Citizen, which has been delivered to homes around Northampton, Daventry and South Northamptonshire in recent days and is described as a “free local newspaper”.

In an editorial published online by the Chronicle & Echo yesterday, the JPIMedia-owned title described the Citizen as a “political propaganda sheet masquerading as local news.”

It is the latest example of political parties mimicking local newspaper titles following a spate of similar incidents in the run-up to the 2019 General Election which were highlighted by HTFP. 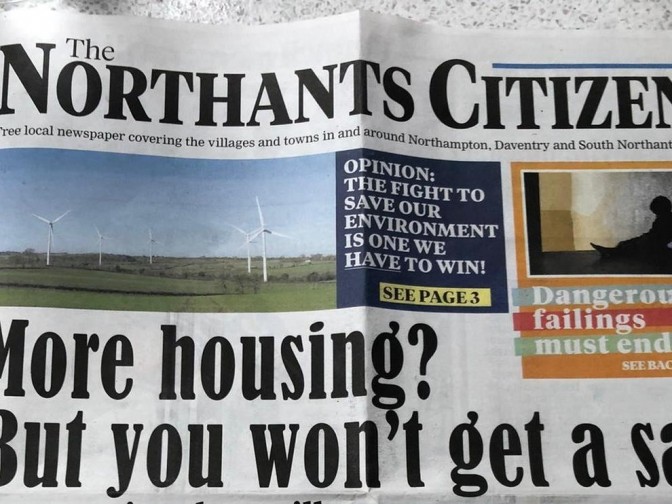 The then-Lib Dem leader Jo Swinson backed her party’s use of the tactic prior to the election, saying the use of such campaign newspapers was “as old as the hills.”

But the row led to regional publisher Newsquest threatening the party with an election news blackout and the Electoral Commission subsequently called for an end to the practice.

The Chronicle & Echo editorial states: “Some of you may have received a copy of a new ‘newspaper’ through your letterbox in the last few days.

“We have used the quote marks around the word newspaper deliberately. It is anything but.

“The Northants Citizen describes itself as a ‘Free local newspaper covering the villages and towns in and around Northampton, Daventry and South Northants’.

“Let’s be clear. It is nothing more than a political propaganda sheet masquerading as local news.”

It went on: “So why is the Chronicle & Echo calling this publication out and not just ignoring it?

“Some politicians are the first to cry ‘fake news’ when they believe that newspapers have not lived up to the high standards we set ourselves for accuracy and balance. Yet this “newspaper” is doing exactly that.

“Our journalists, regardless of what some may think, have no political bias and neither does our newspaper. We are regulated by IPSO – the Independent Press Standards Organisation – and our newspapers answer to them should members of the public believe we have breached the Editor’s Code. None of this applies to the Northants Citizen.

“It is not the first time the Liberal Democrats as a political party have done this. There are examples across the country where they have produced so-called ‘newspapers’. The public can decide for themselves why they choose this tactic to put across their views.”

It concluded: “When political movements try to impersonate us, we are undermined. When members of the public realise they have been fooled by a medium that looks like ours, the next time they read journalism produced by us, they may trust it that bit less.

“This all leads to those in power becoming more powerful, more protected from scrutiny and less accountable to the public. It has to stop.”

“We produce a broad range of newsletters, the content of which is clearly from our local councillors and community campaigners.

“Each leaflet is identified as being from the Liberal Democrats as required by law.

“Every major political party has been producing this style of leaflet for many years.

“We often receive positive feedback from local people who are happy that Liberal Democrats keep in regular touch with their community.”