A nationwide campaign has been launched warning voters not to be “duped” by political parties’ fake local newspapers ahead of the forthcoming elections.

The News Media Association has launched the ‘Don’t Be Duped’ campaign, demanding an end to the practice and calling on politicians of all colours to instead lend their support to “real local journalism”.

We have also recently highlighted numerous examples of the tactic being revived by the Liberal Democrats in recent weeks. 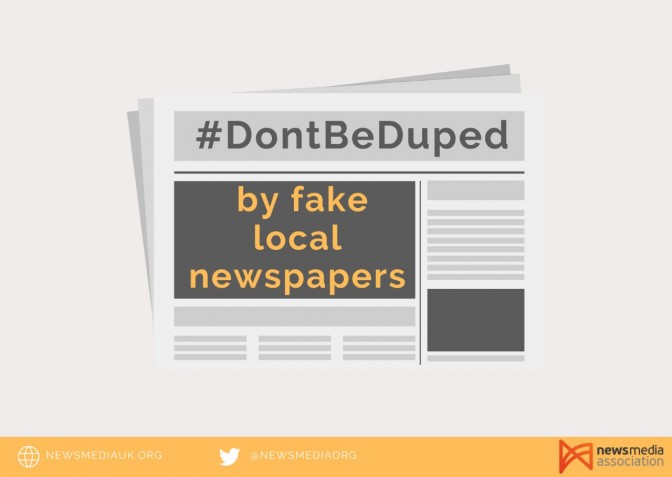 James posted on Twitter: “I’ve a fondness for Chesterfield. It’s a town that really punches above its weight. Editing the Derbyshire Times with such a great team was a privilege.

“But, it seems, it has competition… from a deceitful bunch of Lib Dem politicians pretending to be journalists. Chesterfield, beware.”

The NMA, the trade body for the regional and national press, has written to Lib Dem leader Sir Ed Davey and the Electoral Commission ahead of the campaign’s launch to call for “an end to fake local newspapers”.

Below, NMA chairman Henry Faure Walker, pictured left, sets out why the campaign has been launched and what newspaper readers can do to help.

In the local news media, we work day and night to bring you trusted news and information which you can rely upon.

It is a role we take very seriously and – in an age in which fake news and hoaxes can circulate like wildfire on social media – it has become even more important.

Politicians at the top of Government – and no less than Her Majesty The Queen – have acknowledged the vital importance of our work providing the public with trusted information during the coronavirus pandemic. Why would any right-thinking politician seek to undermine this? Sadly, that is happening right now.

As you read this, political propaganda leaflets designed to look and feel exactly like independent local newspapers are being pushed through letterboxes across the country.

During the 2019 general election, the News Media Association railed against these publications after examples published by Labour, Conservatives and the Lib Dems emerged.

The Electoral Commission criticised the practice, citing it as an example of misleading campaigning techniques which the public were concerned about.

We thought we’d seen the back of them but, sadly, in recent months fake local newspapers published by the Lib Dems have started popping up again.

Make no mistake, these publications are designed to fool you into thinking you are reading independent journalism.

In fact, they are the exact opposite – party political propaganda sheets masquerading as real newspapers. It has been reported that some of the leaflets are not clearly marked as being produced by the Lib Dems.

We think this cynical attempt to mislead you is wrong. It undermines trust in both politicians and independent local newspapers.

That’s why today, the local news media sector is launching the ‘Don’t Be Duped’ campaign to call out these publications for what they are and see them stopped once and for all.

We have written to Sir Ed Davey, Leader of the Liberal Democrats, and the Electoral Commission to explain our concerns and to call for an end to fake local newspapers.

Our message to you, our readers, is Don’t Be Duped by these fake local newspapers. Instead, join us in calling them out.

It’s no secret that the local news media industry is facing some serious challenges.

For too long, the tech giants have profited from our investment in trusted local news while contributing next to nothing back into the sector.

But change is coming and in the next few months we look forward to working with Government and regulators to put in place a robust new regulatory regime to reset the balance.

And a new threat to independent local journalism emerged last week in the form of a BBC announcement of plans for a new network of digital community journalists.

Local news is already provided by commercial outlets and an intervention of this type by the BBC, funded by the licence fee, could seriously hurt local news titles.

The BBC seems to have completely forgotten about the very successful Local News Partnership it enjoys with the independent local news sector which boosts public interest journalism without distorting the marketplace.

Any new investment in local journalism by the BBC should be channelled through the existing partnership which has been widely praised here in the UK and imitated in countries across the world.

As an industry, we will continue work on these challenges and call for interventions such as targeted support for public interest news, business rates relief for local publishers, and a commitment to keep public notices in local papers.

Although our relationship is not always easy, local news media and politicians are both fundamental parts of our democracy.

Rather than seeking to undermine us and trade off the highly trusted relationship we enjoy with our readers, politicians should support the work that we do.

I hope that you will join us in calling for an end to fake local newspapers and urge politicians to instead channel their efforts into supporting real local journalism which benefits us all.