Northern newspapers have slammed Boris Johnson over his broken rail promise despite attempts by the Prime Minister to defend his position via the regional press.

The PM has written for both the Manchester Evening News and Yorkshire Post this morning to explain the UK Government’s Integrated Rail Plan, to be announced today.

Writing for the Post, Mr Johnson confirmed the current plan for the building of the eastern leg of the HS2 line to Leeds is being dropped – breaking a pledge he made to Parliament in February this year.

The Leeds-based daily splashed on the news this morning, running with the headline ‘PM breaks his own rail pledge’. 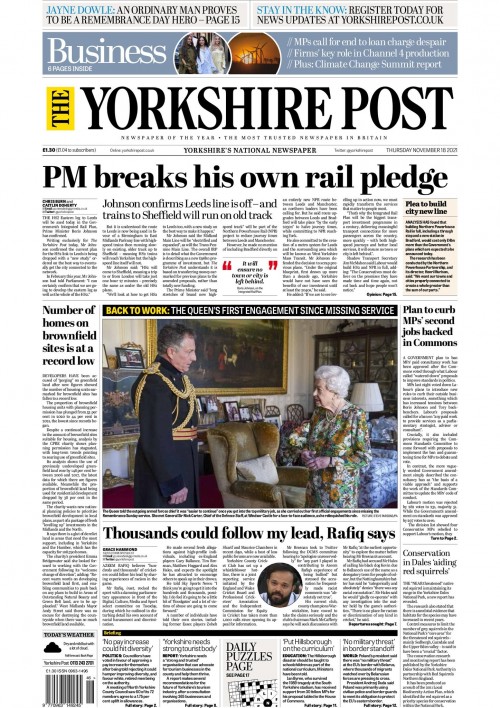 Posting on Twitter, YP editor James Mitchinson wrote: “Good morning on a day when we are going to feel unheard, unimportant, unnecessary.

“A decade of promises to give families in our region parity (not more!) of opportunity with other families elsewhere, all broken.”

Mr Johnson’s decision to use the regional press in an attempt to explain today’s announcement comes after six Reach plc dailies, including the MEN, ran the same front page on Tuesday urging him to keep his promise on rail improvements.

Other dailies in the North of England, including the YP and the Northern Echo, also ran similarly-themed splashes on the same day.

In his editorial for the Post, Mr Johnson confirmed HS2 trains will reach Sheffield, although the line itself will now only reach as far as East Midlands Parkway.

JPIMedia weekly the Sheffield Telegraph has shown its displeasure at the plan, claiming on its front page this morning that the planned link has been scrapped “due to lies on the line”. 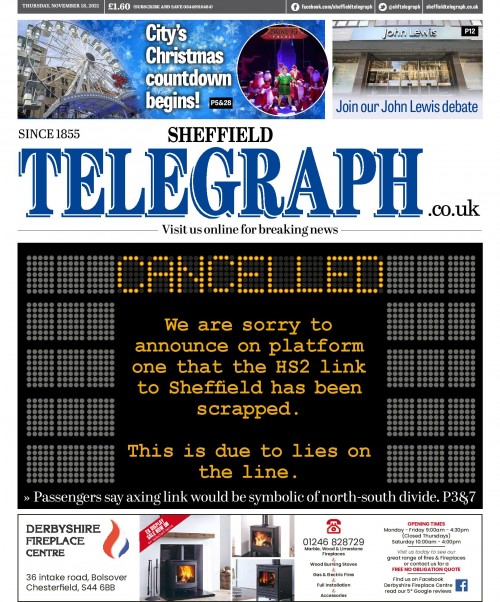 She wrote: “This is trickier than it sounds, even for the Eton educated, and despite the journey being only 35 miles long. Embarrassing really.

“Anyway the train is heavily likely to be delayed, the platform could invariably change at the last minute, and if you are really lucky, it will be completely cancelled, forcing two or more train’s worth of passengers to cram themselves on to the next available service, risking Covid-19 and possible pregnancy.

“Then, endure the journey. Can you believe it can take one hour and 22 minutes to get to Leeds, if the faster services are cancelled?

“Oh, the years of my life I spent on the slow service between Sheffield and Castleford as a young reporter. It only takes two hours to get down to London.”

Ellen added it “wouldn’t be a surprise to look outside and see two men pumping it along like the handcars of the 1850s, such is the speed”.

She wrote: “What makes the glacial pace even worse is the view. Not out of the window, don’t be silly. While you might have booked a seat several weeks ago, you won’t be using it.

“No, I’m afraid you’ll be squashed into a rack with a view of someone’s luggage, or my favourite, trying not to breathe through your nose next to the, inevitably blocked, toilet.

“Then, once you’ve turned up late to work, or missed the meeting you were travelling for, it’s time to do it all again.

“It’s not really good enough for thousands of voters and a huge slice of the country now, is it Boris?”

Criticism of the plan also appeared on the front page of Newcastle daily The Chronicle, one of the other Reach titles to run the spoof ‘Trianspotting’ splash on Tuesday. 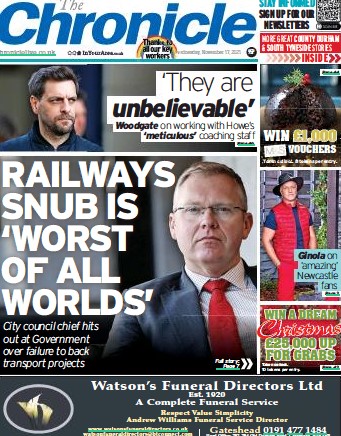 In his piece for the YP, Mr Johnson insisted the decision had been made because high-speed rail is “grindingly slow to build” and claimed ministers will “look at how to get HS2 to Leeds too, with a new study on the best way to make it happen”.

Writing for the MEN, he added: “If this government has one driving mission, it is to reverse years of neglect and level up our country.

“So today we’re launching the single biggest programme of public investment in the history of our railways, beginning with £96 billion of construction and upgrades for schemes serving the Midlands and the North.

“We’re doing this because we’re determined to do what the Manchester Evening News and other newspapers urged on Tuesday.”