Northern dailies have united to run the same “brutal splash” urging Boris Johnson to keep his promise on rail improvements.

Newspapers across the North of England will run the front page tomorrow morning, which pays homage to Danny Boyle’s 1996 film Trainspotting.

The joint campaign comes amid reports the Prime Minister is set to scrap most of the eastern leg of the High Speed 2 railway line and dilute plans for a new line between Leeds and Manchester. 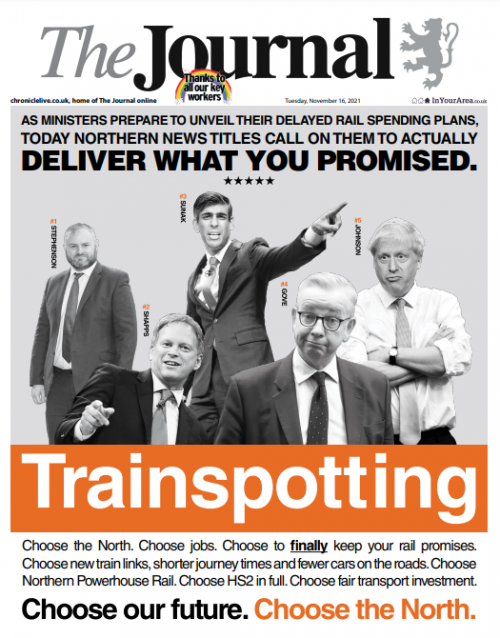 How the design looks on The Journal’s front page

Mr Johnson previously vowed to be the PM to do “with Northern Powerhouse Rail what we did with Crossrail in London” after taking office in 2019.

In an editorial accompanying the campaign’s launch, MEN politics and investigations editor Jen Williams wrote: “If that promise is to be met, it means seamlessly connecting the Western leg of HS2 through to West Yorkshire via an underground station at Manchester Piccadilly – and a new station in Bradford city centre.

“It means a new train line from Liverpool to Manchester, via Manchester Airport. It means that in the North East, Newcastle and Durham are connected into the other side of the high speed network.

“A real strategic plan means the government keeping promises to build HS2 to the North, in full, including the Eastern leg and a fully-funded station at Manchester Airport.

“It also means the East Coast Mainline finally being upgraded to allow for more services, including extra capacity north of York, as well as the electrification of routes around Hull, Selby and Sheffield.

“Otherwise yet another generation will be blighted by the same old creaking, congested, neglected Victorian railways we have long suffered. And our economy will continue to underperform.

“Ministers cannot claim ignorance. They have long known that the North of England does not have the connections it needs.” 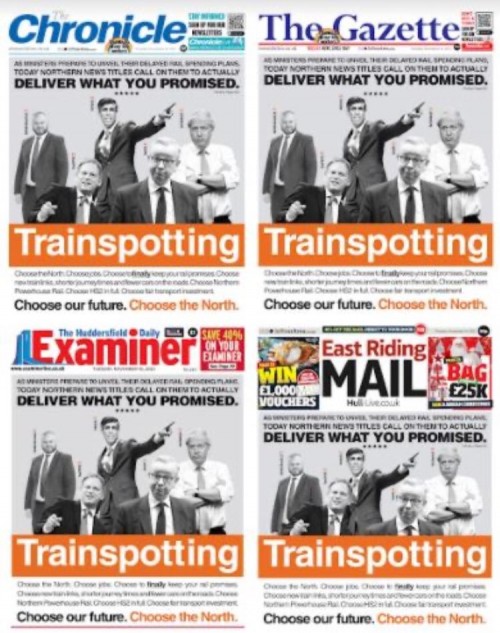 And Reach plc Midlands political editor Jonathan Walker urged ministers to take note of the influence of the regional press.

He wrote: “Hard to understand how the Government got itself into this mess.

“Also, there’s no point briefing national papers about a massive boost for the North if you haven’t thought about how regional papers in the North will report your policy.

“Individually the regionals have fewer readers, but they add up.”

It is not the first time Trainspotting has influenced regional press front pages.

In 2019, Glasgow-based title the Herald on Sunday spoofed the film’s opening lines in order to address the “chaos” caused by Brexit.

The subject of Mr Johnson’s promise also provided splashes for other Nothern dailies including the Northern Echo and the Yorkshire Post. 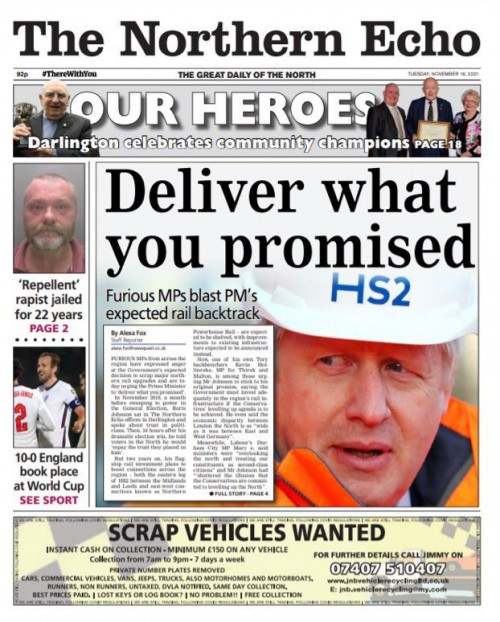 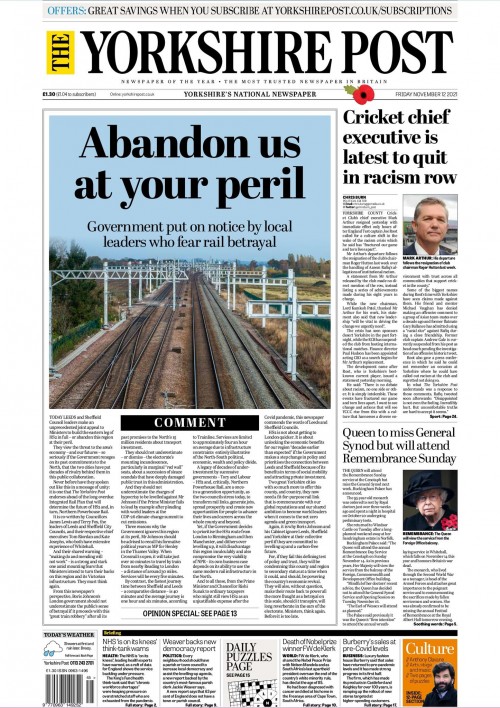