A journalist has been targeted with “menacing and cowardly” graffiti after receiving multiple death threats.

The threatening message against Patricia Devlin, which features the crosshair of a gun next to her name, in east Belfast.

Patricia, who won the News Reporter of the Year and the Scoop of the Year titles at the 2014 Regional Press Awards, has also received multiple death threats – including two within 12 hours.

HTFP reported last year how she had opened up on numerous threats she had received over the previous 18 months – including one of rape against her baby boy. 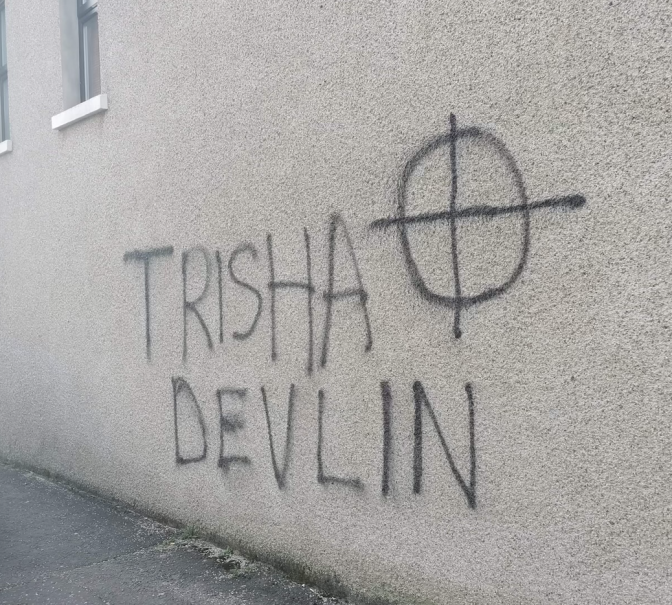 Patricia, who is based in Belfast, subsequently lodged official complaints with two police forces over what she said was a failure to investigate the threat.

She has written numerous articles works for the Dublin-based Sunday exposing criminality and its impact on communities in Northern Ireland, which she believes is linked to the threats she has received.

Speaking to the BBC about the latest threats, Patricia said: “Male journalists who do the same job as me, who have written closer to the bone about paramilitaries, do not get the same level of abuse.

“I suppose these people think that these women are an easier target.”

She added: “Unfortunately it’s escalated and now we’re seeing my name on walls in east Belfast with a picture of a crosshair.

“It’s almost like we’re going back in time, that we’re not in a society that’s going forward.”

He told the Irish Independent: “This is completely unacceptable, and we are fully cooperating with the police about this threat which they are taking very seriously.

“Rigorous investigative journalism is a basic requirement of a democratic society and we’ll not be intimidated from doing our job.

“Our readers know we will follow the truth wherever it leads us and our team of journalists will continue to do so despite this intimidation.”

The National Union fo Journalists has also condemned the threat.

Seamus Dooley, NUJ Irish secretary, said: “This menacing and cowardly graffiti is the behaviour of thugs who are trying to target and intimidate a specific journalist, but they are also trying to send a warning message to other media workers.

“The NUJ calls on the PSNI as well as Northern Ireland’s political and community leaders to do all they can to support independent, quality journalism. The authorities must now identify and prosecute the perpetrators to the full extent of the law.

“This latest threat is an attempt to stop journalists from reporting on current, turbulent events in Northern Ireland. It is also part of a wider trend of increasing threats since the first lockdown.

“Those behind threats need to feel the full force of the law, this is the most effective way to defend and protect media freedom and public interest journalism in Northern Ireland.”

The Police Service of Northern Ireland has said it is investigating three incidents of graffiti that appeared at locations in east Belfast.

A spokesperson added: “We do not discuss the security of individuals however we never ignore anything which may put an individual at risk.”