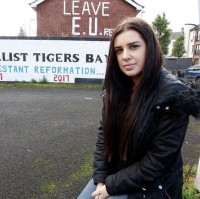 An award-winning journalist has opened up on threats she has faced over the past year-and-a-half – including one of rape against her newborn son.

Patricia Devlin, who the News Reporter of the Year and the Scoop of the Year titles at the 2014 Regional Press Awards, is to file an official complaint to police after receiving what she believes are “real threats” to the safety of her and her children.

Patricia, pictured, says the threats are part of an intimidation campaign by members of at least one criminal gang operating under the name of a loyalist paramilitary group.

The group has been the subject of a number of articles that the Belfast-based journalist has written about for Dublin-based Sunday World exposing criminality and its impact on communities in Northern Ireland.

Speaking to HTFP, Patricia said the abuse is “sectarian and misogynistic in nature”, while all of the online accounts behind the posts are anonymous – with some being set up solely to target her.

She added: “In October last year, I received a message to my personal Facebook account in which the sender threatened to rape my newborn son. Another family member was also named in the message, which was signed off with the name of neo-nazi terrorist organization ‘Combat 18’.

“This occurred after members of a criminal gang posted a direct link to my personal Facebook page on a number of forums.

“I reported this sickening threat, and the anonymous account which it emanated from, to the Police Service of Northern Ireland. To date no one has been arrested or questioned.

“In the last month police have visited me twice in my home to inform me that my safety is at risk. At the beginning of April, I was told of a plan to attack me in my car when visiting an area close to Belfast city centre.

“I had been working with residents in that very same area for a number of months exposing the drug scourge, attacks on the vulnerable and incidents of intimidation.”

Patricia’s decision to speak out comes after Amy Fenton, chief reporter of South Cumbria daily the Mail, was forced to flee her home with her young daughter last month after receiving death threats online.

Last month Patricia and a number of other colleagues at Sunday World and Belfast’s Sunday Life, for which she used to work, were also warned of a blanket threat against them, as reported by HTFP.

She added: “After reporting on a significant drug seizure over the weekend, I once again was subjected to abusive messages.

“This time a claim was made that I am a police informant – a false allegation designed to put me at further risk in my job as a journalist.

“I have since made contact with police and will file a complaint this week.

“No one should underestimate the damage that online abuse can have. Although I can not prove it, I believe this continual targeting of me on a public forum has contributed to real threats against me and my family, including my children. It must be taken more seriously.”