A journalist has been subjected to threatening graffiti days after a fellow female reporter was targeted in a similar attack.

“Despicable” threats have been aimed at Allison Morris, security correspondent at the Belfast-based Irish News, with her name being painted on the side of a wall next to the crosshair of a gun.

Those responsible for the graffiti, on Rosapenna Street, in Belfast, also accused “Alison Moris [sic]” of being an “MI5 Agent”.

HTFP reported last week how Patricia Devlin, another Belfast-based reporter, was also the subject of similar threatening graffiti last week – which also used the image of a crosshair of a gun. 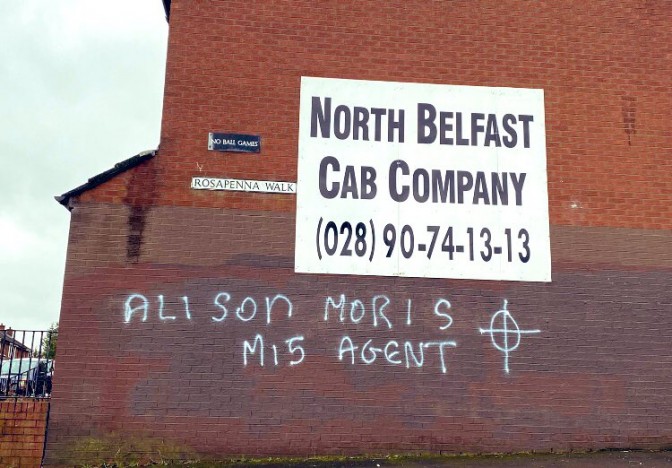 Posting an image of the graffiti on Twitter, Allison said: “If anyone knows an Alison Moris tell her that her name is on a wall in Rosapenna Street – state of that wouldn’t you be scundered [Northern Irish slang for embarrassed]. Idiots.”

Noel Doran, editor of the News, has condemned the threat.

He said: “We condemn the attempt to intimidate our colleague Allison Morris which will not succeed, and we stand with Allison and all other journalists who have faced similarly despicable threats.”

Robin Wilson, who chairs the Belfast branch of the National Union of Journalists, added: “We in the union have dealt with a raft of recent cases of this manner and we will not accept it becoming normal in the way it once was.

“There’s always been an element of male domination and macho behaviour in paramilitary groups and we’re particularly conscious of the fact that threats against women in the media are all too common.

“We in the NUJ stand shoulder to shoulder with our female colleagues.”

Politicians in Northern Ireland have also added their condemnation.

“If only these brave misogynistic artists had an ounce of the courage of Allison Morris and Patricia Devlin, and every other woman going about her job.”

SDLP MLA Matthew O’Toole, chair of the all-party group on press freedom, added: “Something has gone badly wrong in this society when repeated threats of violence against reporters- especially female reporters – has become normalised.

“It is utterly unacceptable in any democracy.”