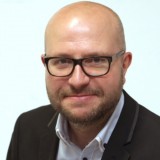 An editor has left his hometown newspaper after five months in charge to take up a “new challenge”.

Ashley Booker has announced his departure from the Mansfield Chad after almost a quarter of a centuury in the regional press – including 21 years with JPIMedia and its forerunner Johnston Press.

Ashley, pictured, was appointed in March as the Chad’s first dedicated editor for a number of years as part of JPIMedia owner National World’s drive to return individual editors to local titles.

But he has now revealed he will be taking up a new post with Nottinghamshire County Council’s communications team on 12 July.

Posting on Twitter on Thursday evening, Ashley wrote: “After nearly 25 years in the industry and 21 with JPI Media – formerly Johnston Press – today was my final day working in regional press.

A new, exciting challenge begins on 12 July – but for now it’s time to have a break and recharge the batteries.

“I’ve thoroughly enjoyed my time in the newspaper industry, made great friends and have some fantastic memories to look back on but now is the time for a fresh start.”

Ashley began his career as a sports reporter on the Ely Standard in 1997 before moving to the Chad in 2000.

Ashley was appointed head of content at its Chesterfield-based sister weekly the Derbyshire Times and five associated titles in 2015, and served as acting group editor for Johnston Press North Midlands during 2016.

In November 2019, he returned to sports reporting as a digital football writer based at Sheffield daily The Star, prior to taking on the editorship of the Chad earlier this year.