Jürgen Klopp has written an open letter to the Liverpool Echo urging readers to refrain from publicly celebrating his club’s title win due to the coronavirus pandemic.

The Liverpool FC manager has used the Echo to plead with supporters to celebrate the team’s Premier League triumph privately in order to minimise the risk of spreading coronavirus.

In his letter, Mr Klopp thanked Liverpool’s supporters for their help in the team’s success.

But he also referred to public celebrations held at the city’s Pier Head on Friday, at which 34 people were injured and fire broke out at the city’s historic Liver building. 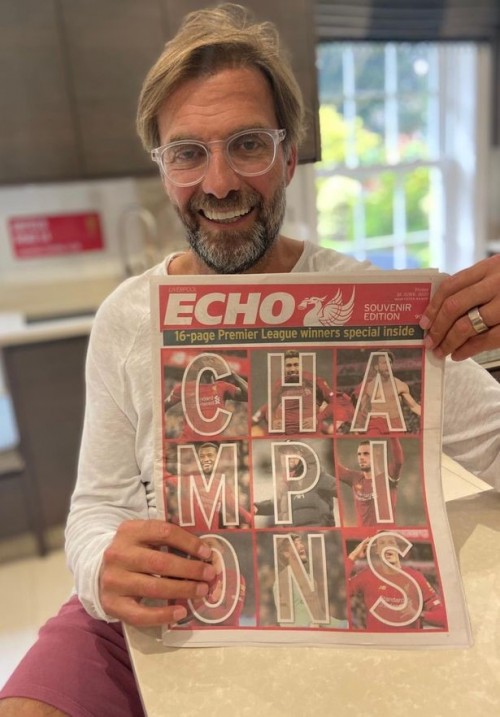 Mr Klopp with Friday’s souvenir edition of the Echo

Mr Klopp wrote: “Firstly, if you are reading this newspaper it is because you care about the city of Liverpool and want to know more about it so in this sense we already have something in common.

“I have never before written a letter to a newspaper. I do a lot of press conferences and I know that I am mentioned in the media more than is normal but this is the first time that I have felt the need to write a letter and the reason for this is that I want to speak directly to the people of Liverpool.

“This is an incredible time for incredible supporters of an incredible club in an incredible city. For some of you, it is the end of a long wait for Liverpool to be champions, but whether you have been waiting for 30 years or 30 minutes I hope that you are enjoying this moment every bit as much as you deserve to.2

But he added: “What I did not love – and I have to say this – was the scenes that took place at the Pier Head on Friday. I am a human being and your passion is also my passion but right now the most important thing is that we do not have these kind of public gatherings.

“We owe it to the most vulnerable in our community, to the health workers who have given so much and whom we have applauded and to the police and local authorities who help us as a club not to do this.

“Please – celebrate – but celebrate in a safe way and in private settings, whereby we do not risk spreading this awful disease further in our community.”

Mr Klopp went on to say he hoped he would be able to write another letter in the Echo in a few months “to thank you for putting the health of our people ahead of everything else”.

He added: Nothing would make me prouder. For now, I would like to thank the supporters of Liverpool and the people of this city who have helped to make us champions.

“This is our moment. It is a special time in all of our lives and you are the ones who have made it possible. Each one of you is a champion in your own right and we cannot wait until we get the chance to celebrate what you have achieved.”

HTFP reported on Friday how Echo editor in chief Alastair Machray had said the paper’s coverage of the triumph had made him “as proud” of his team of journalists as Mr Klopp is of his players.

Alastair told HTFP: “We were thrilled that Jürgen Klopp chose to use the Echo to get his message across. In all humility, it’s recognition that we are the ultimate trusted source for Liverpool Football Club news and views.

“That’s an honour, but also a responsibility which we mustn’t lose sight of.

“In the heat of a huge news story and with enormous need for sensitivity, Klopp’s words were measured and powerful.

“There’s a job as a journalist here if he ever fancies a change.’”