A football club owner has used a regional daily to plead with supporters to stay at home.

Andrea Radrizzani has written an open letter to Leeds United supporters urging them not to venture out in celebration should the club win promotion to the Premier League in the coming days.

In his letter, published on the front page of yesterday’s YEP, Mr Radrizzani told readers “the fight against Covid-19 is not yet over and we must continue to be sensible”. 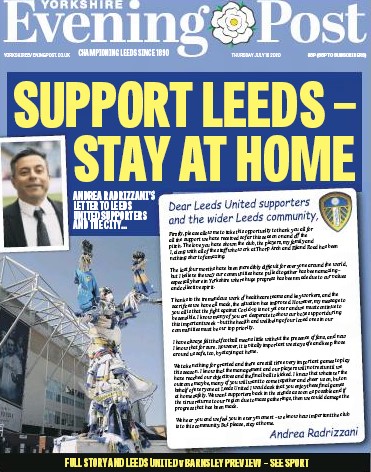 He added: “I know that whatever the outcome may be, many of you will want to come together and cheer us on, but on behalf of everyone at Leeds United I would ask that you enjoy these final games at home safely.

“We want supporters back in the stands as soon as possible and if the virus returns to our region due to mass gatherings, then we could damage the progress that has been made.

“We hear you and we feel you in every moment – we know how important the club is to this community. But please, stay at home.”

The move echoes that of Liverpool manager Jürgen Klopp, who last month penned an open letter to the Liverpool Echo urging readers to refrain from publicly celebrating his club’s title win due to the coronavirus pandemic.

Praising the letter, YEP chief football writer Graham Smyth wrote: “Andrea Radrizzani’s plea to Leeds United fans to support the club from home was not a presumptuous, arrogant assumption that his team will give the city cause to celebrate and gather in the next week.

“All the Whites owner was doing, in writing an open letter that was published on the front page of today’s YEP, was asking for a common sense approach if something should occur in the next few days that creates in supporters an overwhelming desire to take to the streets around [the club’s ground] Elland Road and sing songs.

“Singing those songs at home, or wherever the next two or three games can be viewed while observing social distancing guidelines, is a sacrifice and a difficult one at that.”

He added: “But this is a sacrifice in the short term that could just help fans return to stadiums in the medium term.

“If football cannot show that it can stay inside the white lines of medical and governmental advice, then the fear is that the reunion of supporters and their teams could be further delayed.

“Football’s new normal is unthinkable, in the long term.”