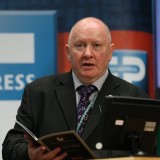 Journalists have held protests in support of colleagues who have faced threats and intimindation in recent weeks.

Members of the NUJ Belfast and district branch committee took part in a socially-distanced demonstration in the city’s Writer’s Square yesterday.

Journalists from all four titles have received threats in recent weeks.

Members of the NUJ Derry and North West branch committee also held their own protest at the city’s Guildhall.

Séamus Dooley, pictured, NUJ Irish secretary, said: “Journalists must publicly stand with those under threat. Intimidation and harassment are not acceptable.

“Threats are occurring nearly every week in Northern Ireland.

“Women journalists in particular are being targeted with vile and misogynist abuse.

“Threats should never be accepted as part of the job of a journalist or any other worker. Intimidation, harassment and online abuse should not be normalised.”

Last month HTFP reported how Belfast-based Sunday World journalist Patricia Devlin had criticised both the Police Service of Northern Ireland and Police Scotland over their handling of a threat of rape made against her newborn son, while PSNI revealed a fortnight ago it was investigating a serious threat against a journalist working for the Bel Tel and Sunday Life.

Noel Doran, editor of the Irish News, last week accused social media companies of not taking a “serious interest” in threats against his reporters during a debate at the Society of Editors Virtual Conference.