HTFP at 20: From alien landings to April Fools that weren’t – our most bizarre stories

Every newspaper publishes its fair share of bizarre stories which live long in the memory – and here at HoldtheFrontPage we’re no different.

Over the last 20 years we’ve covered everything from alien invasions to squirrels on drugs, from communist lookalikes heckling editors to April Fools being reported as fact.

But perhaps our round-up of some of the strangest stories we’ve covered during the past two decades should start with a staple of every newsroom – swearing.

In 2013, we reported how police had been urged to investigate after the Pembrokeshire Herald ran an advertisement which offered readers a free sex act if they used a car rental firm. 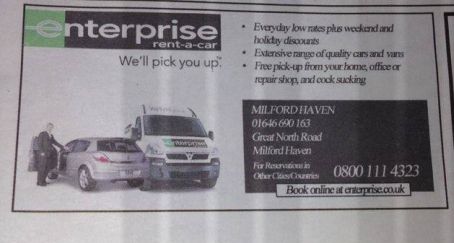 Then just last year the Scunthorpe Telegraph launched its own investigation after a draft of a death notice featuring two four-letter words beginning with ‘c’ appeared on its pages.

And if those examples looked suspiciously like deliberate sabotage on someone’s part, sometimes the offending words can appear just by a slip of the fingers on the keyboard.

In 2010, hundreds of copies of the sadly-now-defunct Ludlow Journal had to be recalled after a mis-spelled picture caption left staff red-faced.

It featured a front-page picture story about a belltower captain called Tony Fuller, but unfortunately that was not how the caption rendered his name. 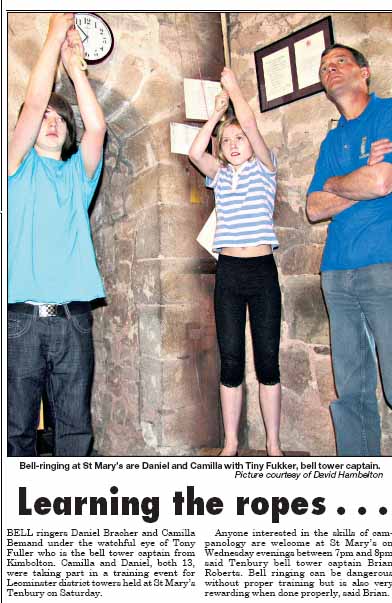 Another staple of many regional journalists’ careers is being sent out to undertake an eating challenge on their patch.

There are obvious health risks associated with such feats of gluttony, as current Brighton Argus editor Arron Hendy and his one-time colleague Ruari Barratt found out to their cost.

Jeremy Ransome, another currently serving editor, also experienced similar discomfort when he was left “in pieces” after trying to review a pizza containing one of the world’s hottest chillies for the Lincolnshire Free Press.

And on the subject of food, a faked story purporting to be from the Coventry Telegraph about a raid on a Walkers Crisps factory, which quoted a spokesman as saying the company used illegal workers to increase profits and boost Gary Lineker’s pay packet for advertising its products, led to social media users calling for a boycott of the firm’s snacks. 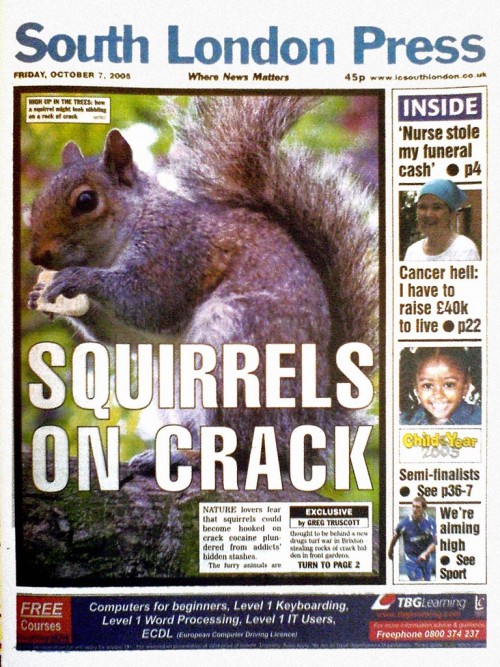 Illegal substances have also featured in some of the more bizarre stories we’ve covered – though thankfully not due to ingestion by journalists.

In 2005, the South London Press carried the above front page splash about squirrels in Brixton getting hooked on crack cocaine – inspiring a local music producer to form a band named Squirrels on Crack in honour of the famous headline.

Then there are those newsroom in-jokes that go wrong and end up in the paper, such as the below example from the Stratford Herald in which a headline-writer clearly thought his paper’s theatre critic was being insufficiently critical of a local arts venue.

In an apology published the following week, the editor blamed the mishap on a “particularly vindictive gremlin.” 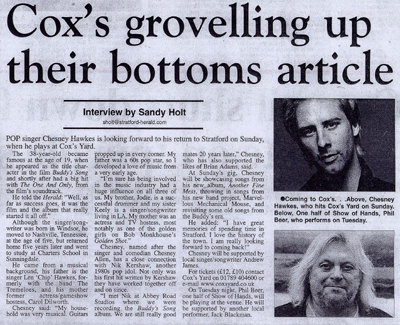 Then again, finding the right headline can be a tricky business, as the Gloucestershire Echo found in 2011 when it published an interview with the principal of Cheltenham Ladies College. 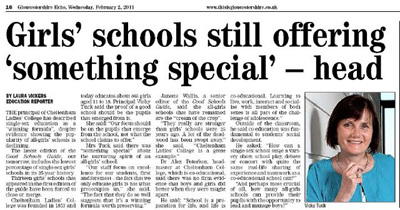 By contrast, the Leicester Mercury’s coverage of an incident in which the city’s Lord Mayor was forced to apologise after his trousers fell down while giving a speech to schoolchildren left no room for ambiguity. 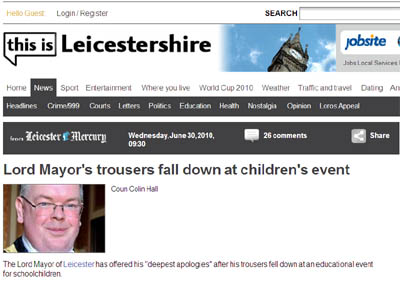 Unfortunate picture-headline juxtapositions have also been a rich source of entertainment down the years, although it was hard not to sympathise with the Belfast Telegraph when the 2012 Costa Concordia disaster coincided with the launch of its latest holiday promo. 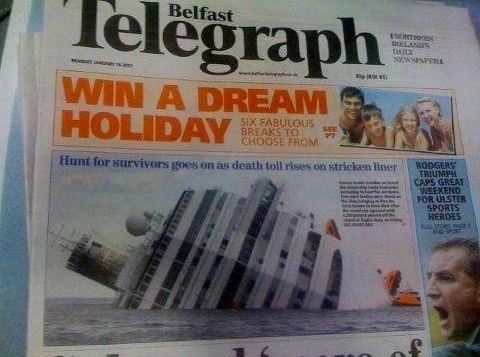 And although this South Wales Evening Post front page from 2005 reported that a woman working at a local GP surgery was NOT Maxine Carr, who had recently been released under a new identity after being jailed for perverting the course of justice during the Soham murders investigation, the woman pictured alongside the story certainly looked a lot like her. 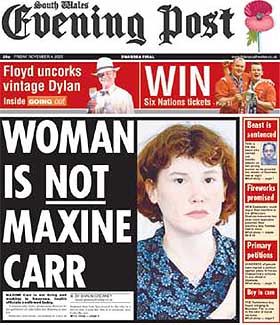 It’s not the only case of a lookalike causing a stir on our pages. In 2014, we reported how Largs & Millport Weekly News boss Drew Cochrane found himself the target of a bearded heckler who strongly resembled a certain former Cuban dictator during a public meeting on Scottish independence.

When asked for his name by Drew following the debate, he responded “Fidel Castro.”

But at least Drew didn’t have as bad a day as the journalist who accidentally spent his first day in the job last June reporting that his patch had been invaded by aliens.

Unfortunate new Plymouth Live recruit Peter Chapman had mistakenly published a test piece on the website, prompting him to admit he owed his colleagues “a few pints.” 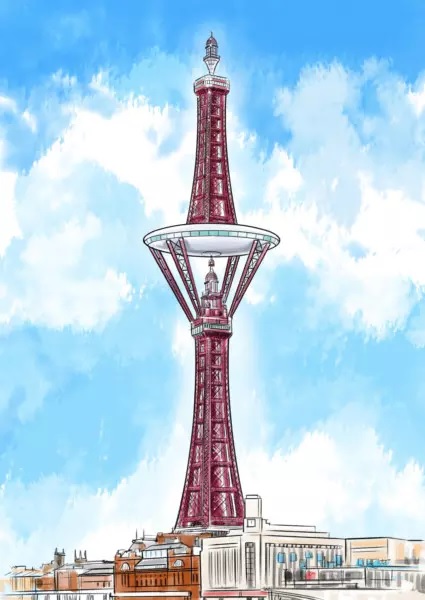 While the silly ones – like extending the Blackpool Tower – are always easy to spot, the best are perhaps those that are so plausible that rival papers follow them up – such as the Brighton and Hove News tale about the Kemp Town Line reopening in 2018 which was faithfully reproduced in rival print daily The Argus.

Three years earlier, Mail Online found itself in a similar position when it reported as fact a Croydon Advertiser spoof about the erection of  a “huge statue of Kate Moss in a provocative yoga pose,” although perhaps it ought to have known better.

But it wasn’t such a laughing matter for the East Anglian Daily Times, which had to explain to incredulous readers that its 1 April 2016 splash on the police introducing customer feedback forms for arrested suspects was, in fact, a genuine story. 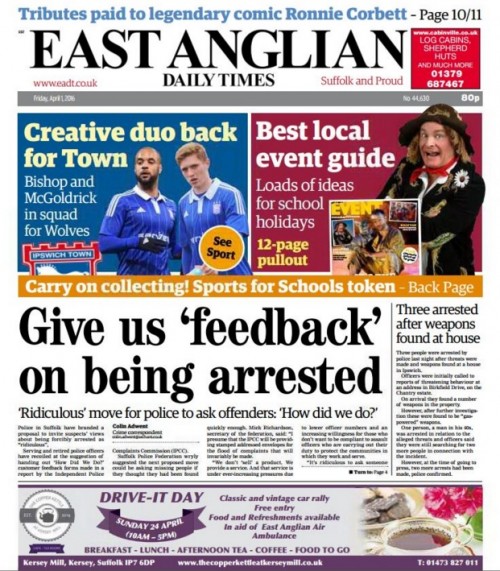