A regional publisher has launched an investigation after foul language appeared on the obituaries page of one of its weekly newspapers.

Reach plc has apologised after the word “cunt” appeared in a draft of a death notice in this week’s edition of the Scunthorpe Telegraph.

Images of the notice, which also contained the word “cock,” were subsequently shared widely online after the Telegraph hit newsstands on Thursday.

Reach plc, which owns the paper, has confirmed it has launched a formal investigation into how the notice came to be published. 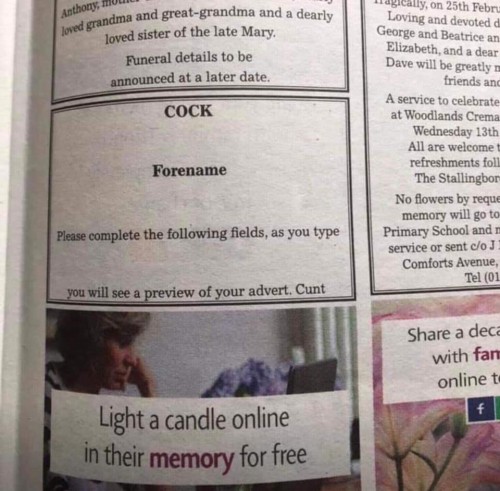 The full text of the offending notice reads: “COCK Forename. Please complete the following fields as you type.

“You will see a preview of your advert. Cunt.”

A Reach plc spokeswoman told HTFP: “We take this very seriously and will formally investigate how it happened.

“We especially regret any pain this may have caused to the loved ones of those featured on the page that day and will be printing a full apology.”

It is understood that the company has also refunded all readers who had obituary notices published on the same page yesterday.