Regional press editors have raised concerns over an “offensive” trend of readers, including court case defendants, citing the death of Caroline Flack in attempts to get stories taken down.

Industry figures say they have been subjected to a “daily deluge” of such complaints after TV presenter took her own life last month.

Since Ms Flack’s death, a ‘Be Kind’ campaign has been launched in a bid to tackle online bullying – but editors say it is now being used as “a stick to beat journalists.”

While parts of the national media have been criticised over their coverage of Ms Flack while she was still alive, her family chose their local newspaper the Eastern Daily Press to posthumously share a message she wrote in the days prior to her death. 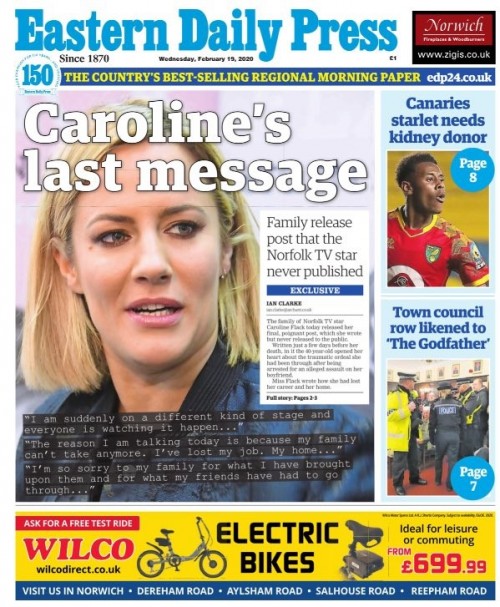 Ian told HTFP: “It’s ironic that the Be Kind trend is now being used as another stick to beat journalists with.

“I sat on the Kent Online newsdesk this week and within the space of a couple of hours three people had mentioned Caroline Flack when haranguing our news editors. In each case, it was an attempt to have a court story removed.

“I received an email the same day claiming that publishing the names and addresses of people in court cases amounted to ‘bullying’ and again urging us to ‘Be Kind’.

Added Ian: “I find it quite offensive that people are attempting to use the Caroline Flack scenario for their own ends and we are letting them know so.

“The abuse our reporters receive on social media or in person for doing their jobs is completely unacceptable and I am pleased so many people across the industry are fighting back.”

Ian had intitially raised the issue on Twitter, citing an email from a woman complaining Iliffe had covered her son’s court case after he was charged with stalking.

The email in question ended with the words: “Haven’t you learned anything from Caroline Flack? #BeKind.”

In reply to Ian’s tweet, Samantha wrote: “We’ve had this. Hoped it was a one-off, sad to see it’s become a thing.

“Defendant called and said we’d better not publish anything from her case because of Caroline Flack.

“It is offensive and inappropriate to use such a tragic case to try and excuse yourself from due process.”

HTFP reported earlier this week how Birmingham Live, one of the titles which Marc oversees, had published an “explainer” setting out why it covers court cases after receiving complaints from defendants about seeing their names in print.

Journalists at the title say they have been asked why they have published reports of cases without the “permission” of defendants and faced demands to take stories down from the site.