An editorial chief has hit out after a council’s press office stopped taking phone calls from his newspapers.

The authority has also come under fire for failing to broadcast meetings being held under lockdown conditions, meaning the discussions are being held without press and public access.

The controversies provided a splash for the Inverness Courier, one of 18 newspapers published by HN&M across the North and North-East of Scotland. 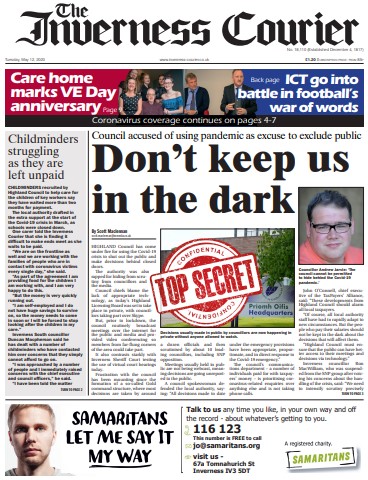 David told HTFP: “Highland Council, like a number of other public sector organisations, seems to think that the COVID-19 crisis is an excuse to shut out the media and, by doing that, the council taxpayers.

“It is extraordinary that they think it’s acceptable to hold meetings and make important decisions in private without the scrutiny of the media. It seems to me to be fundamentally undemocratic.

“When people all over the world are able to hold meetings via the internet, their claims that they don’t have the technological wherewithal to do that same doesn’t hold much water.

“We have also been told by their press office, paid for by the taxpayer, that they won’t take our phone calls during the crisis and will prioritise news about the virus.

“They have the same number of press officers being paid the same amount of money so to say they won’t take our calls is also pretty ridiculous.”

HTFP reported last month how Michael Casey, of Your Thurrock, and Neil Speight, of Thurrock Nub News, had both criticised Thurrock Council for its failure to respond to their requests during the coronavirus pandemic.

Closer to HN&M’s patch, Dundee City Council earlier this month pledged to look at ways of making meetings accessible for the press and public during the lockdown after being criticised by the Dundee Evening Telegraph.

Inverness councillor Ron MacWilliam, who was suspended from Highland Council’s Scottish National Party group after voicing his concerns about the handling of the crisis, told the Courier: “We need to intensify scrutiny precisely because of the pandemic, not shut it down.

“I am deeply worried about the services that will not function and the jobs that will inevitably be lost if Highland Council continues to indulge this culture of chronic secrecy and incompetence.

“The vital role of our local press has also been shamefully undermined by Highland Council. A democracy cannot function without a free press. To exclude the media from the process is downright dangerous.”

In response to the Courier’s story, published on 12 May, Highland Council said it had responded to more than 480 media enquiries by email in the past two months, all within deadlines.

Ruth Cleland, head of communications and resilience at the council, told HTFP: “All enquiries have been professionally responded to timeously and with care, courtesy and good humour.

“Where necessary, we have personally called and spoken to a number of reporters and broadcasters, by phone, to clarify background information.

“We are extremely disappointed that, instead of thanks for providing the Courier with answers to their enquiries and news for their publications, they chose to infer criticism. Meanwhile, we receive praise from colleagues and from other media outlets for our valued work.”

The authority said it is also examining a “range of options” including video conferencing to enable the press to access public committee meetings.