Council to explore holding meetings on video after daily’s criticism 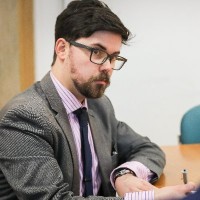 A council leader has pledged to look at ways of making meeting accessible for the press and public during the coronavirus lockdown after being criticised by a regional daily.

A handful of councillors and officers have made decisions in private instead, with Evening Telegraph council reporter Jon Brady, pictured, telling HTFP the authority was “operating like a closed book”.

Councillor Alexander, who represents the Scottish National Party, has now addressed Jon’s comments in an interview with his Evening Telegraph colleague Steven Rae.

He told Steven: “We are using video conferencing to do this interview, so I’m more than happy to look at how we can get that working and make sure it works not only for elected members but also members of the public.

“I don’t think there are any concerns around the decisions that are being made, I think the point of your colleague was around the transparency of those decisions. We are involving everybody and we are reporting on them.

“Would I like to get to the stage where we have video conferencing in place or something which works a little more effectively like that? Absolutely.

“And we’re keeping it under review so, at no point will anybody say that we’re not going to be doing that, we’re looking at what best practice is and trying to make sure it works for Dundee.”

The council previously said reports of decisions which have been made were approved in consultation with opposition party groups, among others.

Jon told HTFP: “I don’t buy the argument that opposition leaders in the council are making equal contributions to decision-making. We can’t know that for sure unless either minutes of these meetings are produced or the discussions are held in public.

“However, I welcome John Alexander’s notion of introducing video conferencing and would encourage him to have officers make it viable at the earliest opportunity.

“We don’t know exactly how long this lockdown will continue for – it could be months yet, without scrutiny of local government. That is unacceptable for the taxpaying public.”