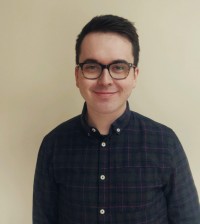 A hyperlocal news publisher has expanded into a new town with a fresh editorial appointment.

The Nub News network is launching in Macclesfield, where it has appointed James Kelly as editor.

Macclesfield becomes the 30th town in which Nub News has launched as part of the network’s ongoing drive to create 700 websites employing 200 journalists.

Originally from Northern Ireland, James trained at News Associates in Manchester, gaining an NCTJ-accredited diploma in multimedia journalism, before working for the Congleton Chronicle as a trainee reporter.

James, pictured, said: “I’m passionate about local news and Nub News gives me the opportunity to really focus on my town rather than a bigger region.”

Nub News founder Karl Hancock said: “Like Tom, James had had a good grounding in print media and is raring to go. This will be our 30th town and we intend to keep on growing.

“We are in tough unprecedented times but I feel that rather than putting our foot on the brake, we should continue to expand. Our low-cost business model is working and we are signing up sponsors.

“The local news industry has been on the decline for many years and the coronavirus crisis has exacerbated that. We have seen lay-offs, temporary newspaper shut-downs and staff being furloughed.

“At Nub News, we continue to pay all our staff full wages and we will not be asking for government for help.”

Karl said Nub News had enjoyed a record month in March, with page views topping 1m and traffic up nearly 50pc on February.

The company is continuing to recruit journalists across the country via an advertisement on HTFP which can be viewed here.

Added Karl: “If you are interested in joining Nub News then please get in touch via the advert on HTFP. My main message to those applying for jobs with Nub News is to do the research beforehand on the town or towns you’d like to cover and, importantly, why they would be suitable for Nub News.

“Ideal towns would be those situated near to our existing towns and/or those small or mid-sized towns where there has been closure or consolidation in the local press.”