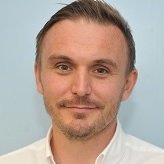 A sports journalist banned by a football club three months ago has become The Athletic’s latest recruit from the regional press.

Philip Buckingham, pictured, has left the Hull Daily Mail after covering Hull City for the past 14 years to join the US sports news site as a football news correspondent.

The Mail’s journalists were told in June they were “not welcome” at the club’s KCOM stadium home ground over “what was perceived to be negative coverage”.

The Athletic officially launched in the UK last year with a 57-strong editorial team – including a dozen journalists poached directly from regional press titles.

In a piece introducing himself to readers of The Athletic, Philip wrote: “For the past 14 years, I have covered every chapter of Hull City’s rise and fall as chief football writer for the Hull Daily Mail.

“Three promotions and four relegations have been chalked up, not to mention an FA Cup final and a brief adventure in the Europa League.

“City have never had it better than a golden decade orchestrated by Peter Taylor, Phil Brown and Steve Bruce. Five seasons in the Premier League brought unprecedented highs and trips I could never have foreseen.

“The ride was fantastic but gaining that heightened appreciation of what a football club means to a community and its supporters was better.

“I’ve reported on fans clinging to heritage and tradition as the club’s owners, the Allam family, attempted to push through a rebrand of Hull Tigers. After that, it has become a long battle for relevance against the rise of apathy.”

Philip went on to note political struggles at the club had “trumped the football” at times.

He added: “Relegation to League One in July was the new low point of covering Hull City and also marked my end of the road with a move to The Athletic as a football news correspondent.

“The last 13 months have told some fantastic stories and tapped into why football matters so much to so many.
“Day-to-day news sharpens the narrative and breaking a story first, whether it’s a takeover or a transfer, will always provide that injection of adrenaline.

“A big exclusive is a journalist’s 30-yard screamer and gets supporters talking. I’ll always endeavour to dig one of those out and shine a light on the issues that mean the most.”