A weekly newspaper has hit out at a council’s “Stasi-like” investigation into the source of a story it ran.

HTFP reported earlier this month how Maidstone Borough Council had been critcised after a meeting about the building of thousands of new homes was held in secret, even though the Kent Messenger had already revealed a number of the sites earmarked for development in November last year.

The Messenger ran a follow-up on the issue in its 6 June edition, revealing that speculative talks had been held about a site in the Kent countryside near Maidstone, which could take between 2,500 and 5,000 homes.

As a result, the council launched an investigation into the source of the leak, with an email from its head of legal partnership Patricia Narebor outlining everyone at the meeting, including councillors and officers, would be individually interviewed. 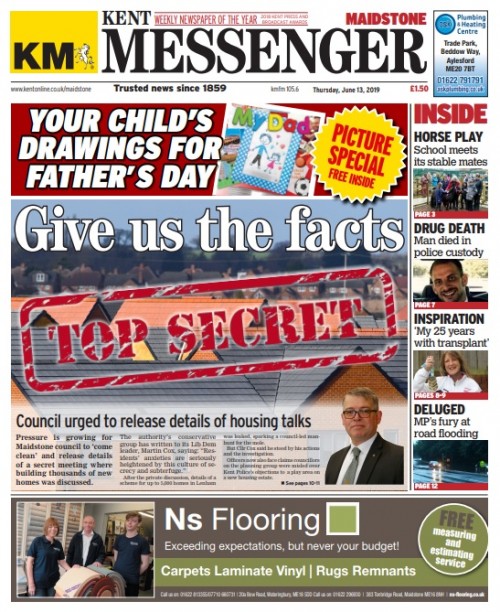 Her email added: “The interests of third parties and the council would be compromised by the release of information at that stage, together with breaching the council’s contractual obligation.

On its front page the following week, pictured above, the Messenger reported pressure was mounting for the details of the meeting to be made public, although the authority’s leader Martin Cox told the paper he he stood by his actions and the subsequent investigation.

Messenger news editor Mary Graham told HTFP: “Everyone in Maidstone should be very worried about these developments. As we said before the public seem to be very low down on the consideration list.

“We fail to understand why the council seems to think people will not be able to cope with understanding these housing talks are at a very early stage. Unless of course, this is more about suppressing any opposition and keeping developers on-side until the council’s managed ‘formal consultation stage’ can begin. It has been an accepted part of democracy that elected councillors will often speak about the big issues of the day they feel concerned about.

“We find the language emerging from the authority is deeply troubling in suggesting this process is now ‘a leak of confidential information’ and subsequently everyone at that meeting can expect an interrogation. Since when did we live in a Stasi-like state?

“Quite simply the public has a right to be involved in every stage of this housing process and a healthy debate of the issue is in the best interests of democracy.”