A council held a meeting in secret despite details of some of its subject matter already having been made public by a weekly newspaper.

Maidstone Borough Council has been critcised after discussions about the building of thousands of new homes were kept under wraps, even though the Kent Messenger had revealed a number of sites earmarked for development in November last year.

Members of the authority’s policy and resources committee talked about the matter in private after a proposal by Liberal Democrat council leader Martin Cox.

According to the Messenger, the move was opposed by a number of councillors including opposition Tory Jonathan Purle. 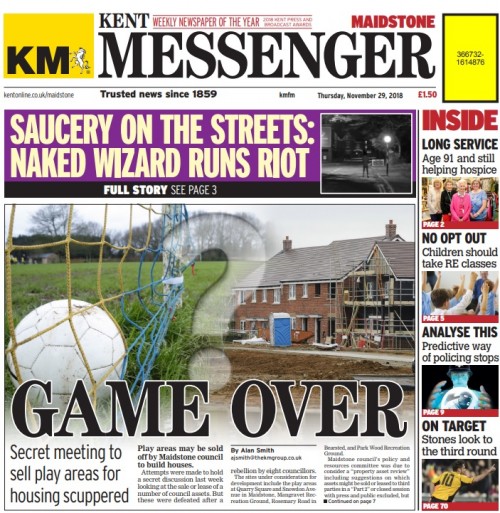 The Messenger revealed some details about the proposal in November

He told the meeting: “This is clearly a matter that will be of concern to my constituents.

“It also concerns a number of sites that are not confidential as they’ve already appeared on the front page of the Kent Messenger.”

However, council chief executive Alison Broom insisted she would not share information with councillors unless the meeting was in private, saying the authority “will need to work very carefully with other people in order to manage how that information does go into the public domain”.

She added: “This council has signed non-disclosure agreements with some of the landowners to whom these sites refer. I am not prepared to provide advice to you on those items in public.”

Messenger editor Denise Eaton told HTFP: “Phrases such as ‘we will need to work very carefully… in order to manage how that information does go into the public domain’ and ‘non-disclosure agreements’ signed in advance of a council meeting should be sending shivers down the spines of anyone who believes in an open democracy.

“Quite simply, the public has a right to know what is being considered and given ample chance to voice their informed views rather than wait until something becomes a fait accompli.

“The public are not mere bystanders in the democratic process, particular when it comes to something as weighty as determining the number of homes on their doorstep.

“They should be considered active participants and it worries me greatly that this appears to be very much low down on the consideration list.”

HTFP has approached Maidstone Borough Council for a comment.