A woman beaten by a teenager branded a “danger to the public” has praised a regional daily’s fight to name her attacker.

The Leicester Mercury has publicly identified 18-year-old Jack Sharpe, who subjected his date Emily Harvey to an ordeal in which she was strangled, beaten with a baseball bat, hit with a frying pan and attacked with a hoover attachment.

HTFP reported last month how a judge had rejected the Mercury’s application to name Sharpe, then 17, when he was jailed in relation to the attack at his flat in Loughborough.

Sharpe, who was described at Leicester Crown Court as a “danger to the public” who poses a “very high risk of harm” to women with whom he is intimately involved, turned 18 on Saturday, meaning the order protecting him had lapsed. 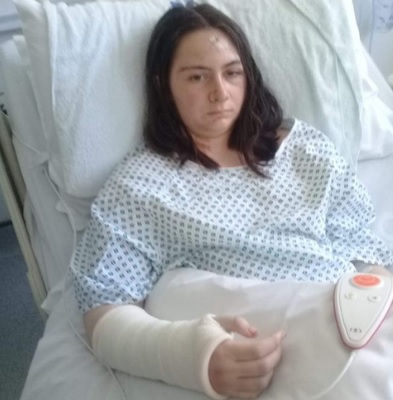 Emily Harvey recovering after the attack

Speaking to the Mercury about its descision to name her attacker, 19-year-old Ms Harvey said: “I think it is very important that everyone gets to see the face of the person who attacked me. It was Jack Sharpe and what he did to me will live with me forever.

“I think it is only right that his face and his name is put out there for all to know and see. I will never forget his face and how it changed when he began to attack me.

“This has to be part of his punishment and so that every other young woman out there is warned about him. He was really nice until he got me over to Loughborough and then to his flat. Then he changed. This should be done to help protect the public and to help stop him attacking another woman.”

The Mercury has requested a picture of the defendant from Leicestershire Police, but the force has said it will not provide an image.

Ms Harvey’s father Richard told the newspaper: “This person has to be named after he nearly killed my daughter. I was shocked to hear that he had 10 previous convictions, many of which involved violence against a person.

“It has to be proper justice that Sharpe is named and pictured. To me it is beyond argument that it is in the interests of justice to warn everyone about him.

“He could easily have killed my daughter in his savage and sadistic and motiveless attack on her. I know he has rights, but so does my daughter and all the other young women out there who need to be warned about him.

“It was said in court that Sharpe was a dangerous person. The public needs to warned about dangerous people – and that means publishing their names and photograph.

“I think it is outrageous that the police have refused to release a picture of this very dangerous offender.

“Why would they do that when they could issue the photograph to warn people? It does not make any sense and leaves myself and my daughter feeling as if we have been cheated in some way.”

Mercury senior reporter Adrian Troughton had argued in court last month that the reporting restrictions should be lifted because of the seriousness of the crime to which Sharpe had pleaded guilty and the fact that he had been classed as a dangerous person by a probation service report.

But Judge Nicholas Dean QC said he had to balance the public interest against the interests of the teen, who had vulnerabilities and could be rehabilitated.

Adrian told HTFP: “We received full backing from both Emily Harvey and her father Richard in our fight to have the reporting restrictions lifted so that we could name Jack Sharpe. They also showed us the same unstinting support in the decision to name Emily’s attacker once he turned 18.

“The courage and dignity they have both displayed throughout this process, which has been painful for Emily and her family, is remarkable. They were both of the opinion that, as a dangerous individual, it was in the public interest to name Jack Sharpe. This was our focus throughout.”