A judge has rejected a regional daily’s bid to name a teenager who is a “danger to the public” and also poses a “very high risk of harm” to women with whom he is intimately involved.

The Leicester Mercury fought to reveal the identity of the 17-year-old who strangled his 19-year-old date until she passed out, while Leicester Crown Court also heard the boy beat her so savagely he broke a baseball bat, as well as hitting her with a frying pan and a hoover attachment during the attack.

He also expressed his intention to kill the woman, and told police he thought he had done so when he was arrested, while it was further revealed he had 10 previous convictions for 20 offences – including racially aggravated assaults, theft, criminal damage and pushing a five-year-old child into a canal.

Despite this, Judge Nicholas Dean QC ruled against the Mercury’s request, delivered in court by senior reporter Adrian Troughton, on the grounds it was not in the interests of justice to lift the ban. 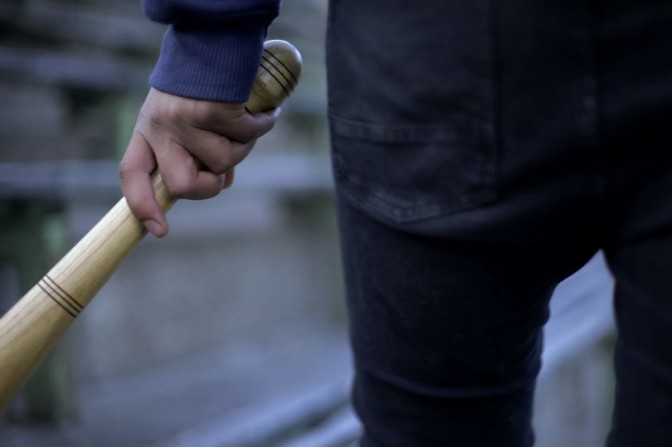 The teen attacked his victim with a baseball bat

Adrian argued that the reporting restrictions should be lifted because of the seriousness of the crime to which the boy, from Loughborough, had pleaded guilty and the fact that he had been classed as a dangerous person by a probation service report, adding the defendant was due to turn 18 in the near future.

But Judge Dean said he had to balance the public interest against the interests of the teen, who had vulnerabilities and could be rehabilitated,.

He told the court: “It is not an easy balance to strike. It does seem to me that there is potential for damage to the defendant by him being identified at this stage. It’s very difficult to assess to what extent publicity might be damaging, there may be knock on consequences for his family.

“It seems appropriate to maintain the status quo. I have not heard sufficient reason for the lifting of the restrictions attached to naming this defendant today so the restrictions will remain in place until his 18th birthday.”

The court heard how the couple met face to face for the first time on Saturday 24 August after they had been messaging on an internet dating app, with the attacker paying for his victim to travel to his home in a taxi from the Peterborough area.

They shared a day and night together at his flat, but the boy became “very violent” after he dropped her mobile phone down the toiler so she could not call her mother.

Judge Dean said: “There followed a prolonged period of sadistic cruelty. He attacked her. He broke a baseball bat during the attack. He then beat her with a frying pan and later still, hit her with a hoover attachment.

“He strangled her. He humiliated her. He filmed her and degradingly he exchanged messages with his friend and half-brother in conversations that are really quite disturbing. He expressed at one stage, an intention to kill her. He told police that he thought he had killed her.”

Jonathan Dunne, prosecuting, told how the assault ended when the boy laid down on the floor and accused his date of attacking him, at which point she took the chance to run out of his flat and into the arms of a neighbour who called the police.

A victim impact statement provided to the court said the episode had a “profound psychological effect on here, leaving her scared to go out and “deeply depressed.”

Mr Dunne said: “The [pre-sentence probation service] report states that he poses a high risk of harm to the public, to males or females, if he feels they have wronged him in some way. It says he presents a very high risk of harm to females if he has some intimate involvement with them.”

The boy pleaded guilty to wounding with intent to cause GBH on 25 August, and Gary Short, defending, told the court his client had mental health issues with “his own particular difficulties”.

Judge Dean, who handed down a nine-year extended sentence which will see the boy serve five years behind bars then four years released on licence, told him: “I hope after this that you will no longer be a danger to the public when you are released.”

Alongside its report of the sentencing, the Mercury carried a piece explaining why it could not name the boy on its Leicestershire Live sister website.

Editor George Oliver told HTFP: “The Mercury, like other titles, frequently receives comments from readers asking why it is not naming defendants. Journalists understand why this is the case but it’s not always clear to the reader why some defendants are given anonymity.

“It was for that reason we put together a short piece explaining the application made by the Mercury and the reasons heard by the court for its refusal.

“We would not, as a matter of course, apply to identify a defendant aged under 18. However, we felt in this instance that the circumstances of the case meant that an application merited consideration.

“We are grateful to Judge Dean for giving the request his time and for setting out his reasoning. We appreciate that there are often background considerations of which we are not aware and we respect the decision reached.”