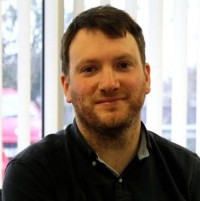 A weekly newspaper’s sports editor has become the latest regional journalist to open up about his struggles with mental health.

Matt Smart, who works for the North Devon Gazette, has gone public about his depression battle in a bid to get more people to seek help if they are struggling with similar issues.

Matt, pictured, visited his doctor last year, and his diagnosis led to him reducing his hours at the Barnstaple-based paper with the support of his colleagues.

HTFP reported in March how Liverpool Echo reporter Gemma Sherlock had written a first-person piece in which she discussed a past suicide attempt, while a number of other journalists working in the industry have also gone public on their own experiences with mental health in recent years.

In a piece for the Gazette describing his own experience, Matt wrote: “Sometimes there’s a ‘why’ when it comes to low mood, but a lot of the time there isn’t. On paper I’m one of those people who ‘hasn’t got anything to be depressed about’, with a caring and supportive family, partner and an (arguably) nice job.

“I would not be able to tell you why I was feeling so constantly tired, irritable and unmotivated. Sometimes your brain doesn’t need a reason to turn against itself and start feeding you negative thoughts, and I soon found myself regularly having feelings of self-loathing, worthlessness, and at its very worst, feeling like life might not be worth living.

“With all that going on it’s difficult to be a decent friend, boyfriend, or colleague, but I found myself doing just enough to try and cover it up. It took a lot of effort and was physically draining, which is why I spent a lot more time stuck to my sofa or sleeping.

“It took a long time for me to go from catching myself thinking ‘this really isn’t healthy’, to picking up a phone and calling the doctor. In that time I had taken in countless adverts on TV, in the podcasts I listen to, and even in the pages of the Gazette. Being a man between 16 and 30 years of age I’m right in the age group where suicide is the most common cause of death, but I was still trying as hard as I could to bury my head in the sand.”

Matt added he had penned the piece, published two weeks ago, “in the small hope that someone somewhere can relate to what I’ve said and have the confidence to talk to someone about it”.

Speaking to HTFP, he said: “The reaction I’ve had since the story was published has been truly heart-warming, be it from Gazette readers, contacts, friends or family.

“I’ve been able to have so many conversations with people who could relate to the article, so it has only reaffirmed how important it is to talk about mental health and it’s been really encouraging that the article has been a bit of a conversation starter.”